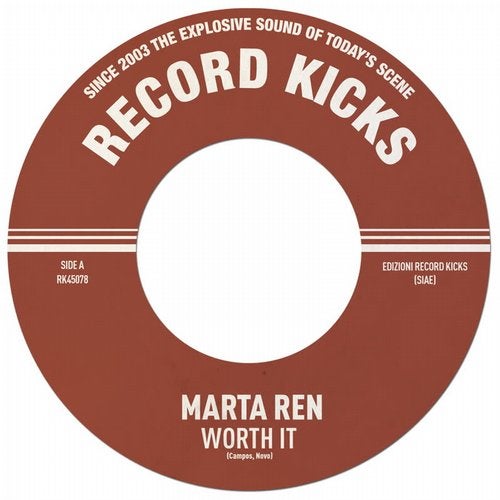 Produced by Emre Ramazanoglu (Noel Gallagher, Lily Allen, Richard Ashcroft...) Portughese soul sister Marta Ren returns with a smashing new single on limited edition funk 45 vinyl.
Record Kicks is proud to present you the return of Portuguese Soul Sister #1 Marta Ren. The new single "Worth It" that hit the streets June 07th on limited edition 45 and digital anticipates the upcoming new album release expected on Record Kicks for early 2020. "Worth it" has been mixed and produced in London by hitmaking producer and engineer Emre Ramazanoglu who in his 20 years career has garnered an impressive resume working closely with Noel Gallagher, Lily Allen, Richard Ashcroft, Spiritulised and Jack Savoretti amongst the others. The result of the collaboration between Emre and Marta is an impressive early 70s soul stormer with a punky feeling and an irresistible crescendo accompanied by unique Marta's powerful voice, something that would make the founding JB's soul sisters proud.
Marta Ren exploded onto the international soul scene with her debut album "Stop Look Listen" in 2016 but she has been around in the Portuguese scene since the mid 90s with The Bombazines. After the release of "Stop Look Listen" she has extensively played all over Europe including Trans Musicales festival in Rennes, Sziget Festival, Eurosonic and Mostly Jazz Funk in Birmingham. Marta's passion has always been for the deepest funk and rawest soul of the sixties and early seventies and with this new single she is finally back to rule the world!