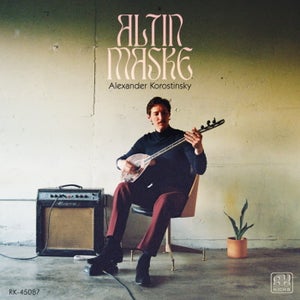 Record Kicks presents "Altin Maske", the second extract form the debut 45 by Alexander Korostinsky, already known for his work in Whatitdo Archive Group and The Sextones.

Record Kicks is pleased to announce the debut 45 by Alexander Korostinsky (of The Sextones & Whatitdo Archive Group), out June 17th, 2022. "Altin Maske" is the second extract and it will be available on all digital platforms on that same day. Consumed by the dark arts of songcraft, recording, and producing, Korostinsky's debut 45 offers both a deep appreciation to the fascinating world of Anatolian Psych-Rock and an intimate glimpse into his ascending journey as an ambitious artist. Having quickly picked up the Baglama saz, Korostinsky showcases his autodidactic abilities as both a bassist, guitarist, sitarist, percussionist and now an electric Baglama player on this first release.


The second single "Altin Maske", out on June 17th, finds our musical landscape in an arid, deserted land, much like the deserts of Korostinsky's home state of Nevada. A hypnotic melody dances across the speakers, urging you to give yourself up into a trance only to be shaken awake by the staccato synthesizers and acoustic guitars that make up the rest of the arrangement-a musical yin-yang conjuring eastern melodies against western rhythms. "I love researching and becoming intimately familiar with all types of music," Korostinsky continues, "The Anatolian psych movement had been on heavy rotation for me in the last couple of years, and I wanted to blend that feeling with my love for David Axelrod's melodic arrangements and chordal movements. I really feel like these songs ebody that spirit."


The Reno born-and-raised musician first came into the international spotlight as the bassist and co-writer for soul group The Sextones and then again with his work leading the Whatitdo Archive Group into crate-digging Valhalla with their recent release of The Black Stone Affair.

Having worked with almost every prominent Reno musician over the last 20 years, Korostinsky finally arrives as a fully-formed solo artist worth taking note of.
Meticulously recorded and produced entirely on a Tascam 388 by Korostinsky at his own Archive Group Studios,this 45 is imbued with Korostinsky's love of analog recording production and vintage records. One listen and you'll notice thatthese songs are begging to be sampled and are a must have for any serious crate-digger. If this first release is any indication of what we can expect from him in the future, then we are excited to see where he takes us next.