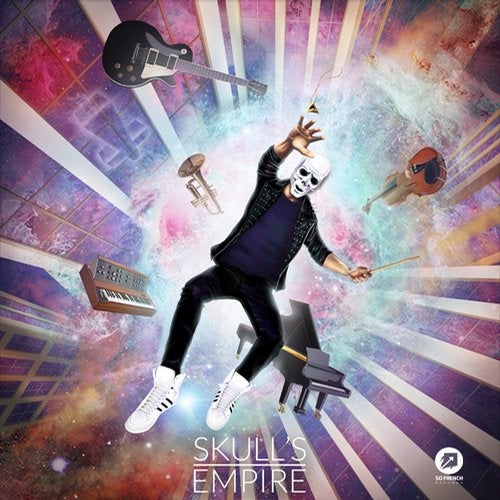 Supported and charted by Steige, Superfunk, Police Records, Kovary, Revolte,The Frederick,The Supermen Lovers, Naeleck, Dax Riders, Thony Ritz, Allure, Butyreux,Atrey, Linoleum, Adrian Wreck, Mac Stanton, No Kiss With Gloss, Soul Machine.
So French Records presents his brand new amazing new release 'Skull's Empire', from So French phenomenon 'Moosak', talented artist based in Poland. The album release gathers 11 original solid french house tracks.
Skulls Empire is an album taking us back in time to when Moosak first felt hes an integral part of the music. This happened after he had listened to the Daft Punks full discography. Hooked on the French sound like a drug addict Moosak began developing his skills of French art. With each passing day he was digging deeper and deeper in the French-touch music culture, getting to know the works of Justice as well as the whole Ed Banger Records family. Nowadays, the media offer us a little when it comes to quality music. The album, which we are talking about is a world in which Moosak lives. Without paying attention to trends, sales or popularity, he felt that recording this album was a necessity as well as his dream debut. When listening to the album its easy to recognise all those artists who have had influence on Moosaks current sound and it was an intentional move his tip of the hat to the founders of the French-touch sound.
It will be released for exclusive on So French Records the 18th of May!
A massive french touch master piece to get imediatly!
01. Intro
02. The Atomic
03. Origin
04. Angel
05. Girls
06. Frenchise
07. The Sound Of The Future
08. Time Machine
09. Fluster
10. Let Me Take Back My Life
11. Final Funk