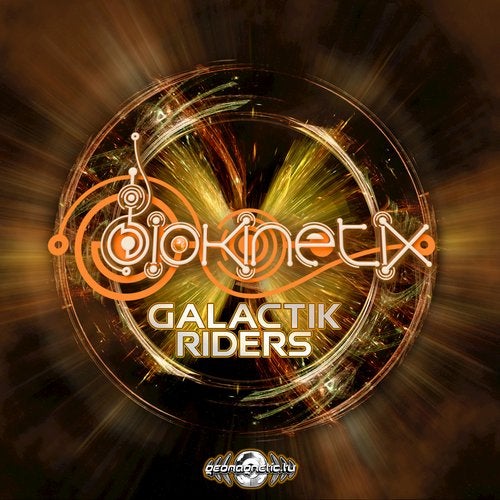 Geomagnetic Records presents this hidden gem of mega blasting tunes from Biokinetix that was just re-discovered and ready to explode on your dance floor. Galactik Riders encompasses thirteen smashing fullon night style super tunes seasoned with a delicious touch of melodic uplifting grooves to keep you from going too crazy! Fabry (Biokinetix) was born in France in 1977 and was rocked into a varied musical world from an early age (Rock, Soul, Electro, Trance, Reggae). His first experience as a DJ years ago was on vinyl in London, mixing NuNRG and Psy-trance. After 4 years he decided to come back to France and in 2006 Fabry signed with ETC (epidemictrancecorp.com) and shared the stage with acts like Bizzare Contact, Time Lock, Ananda Shake, Hyper Frequencies and more. After years as a DJ, Fabry felt inspired to create his own tracks under the project name "Biokinetix", and less than 1 year later he presented his first live set at Morphonic records events. He is influenced by psy and trance producers such as Azax, Damage, Bliss, Alien Project, Lab4, Tinrib and more. In 2008 he met Ovnimoon and was selected for his first release on Geomagnetic's Goa Rec (usa) with the tune Crystal Activity. In 2009 he signed with Morphonic Rec his first 4 exclusive tracks featuring energetic structures and twisted synthetic sounds! In 2010 he released a full length co-released album I3D1 and his first Biokinetix and Friends Remixes album including collaborations with leading full-on producers like Mesmerizer, Digital Sound Project, Polypheme, Jaws Underground, SOM, Crystal Network and more. In 2011 he and Mindstorm at Geomagnetic collaborated to make the compilation Magnetik Attraction. His 3rd album 21st Century returned on Morphonic Records, and then in the Spring of 2012 he delivered his 4th album Rock The World on Geomagnetic. After countless collaborations and remix projects his sound had been vastly improved so his project hit the world with an epic tour. Later in 2012 Goa Records saw his return with Trance4Mate, a 2CD live double album, while taking time to work with his good friend Phoenix, creating the joint project Perfect Match and release their album Bad Boys on Geomagnetic. In 2015 he presented his 7th album "The Show" featuring a huge update once again with a new studio pumping the biggest hits ever. Since 2009, Fabry has had the pleasure of releasing music with top labels around the world including Hadra, Profound, Morphonic, Planet BEN, Geomagnetic, Digital Drugs, Mind Control, Moon Spirits, InTrance, Midijum, EDM Rec, Power House, Bass Star, Psy World, Positive Reaction, Goa Crops, YouTunez, Woorpz, Party Label Unique, LW Rec, Woomb, Popol Vuh, Fresh Frequencies, Under Voice and more, his massive catalog of songs have been released more than 400 times and streamed to millions of listeners world-wide.