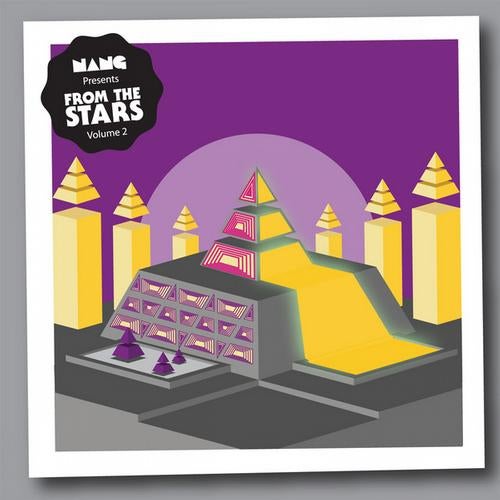 Following on from our ludicrous but well-received Sci-Fi covers album 'From The Stars Volume 1' in 2010 we thought it was time for a sequel. Cue the hyper-driven 'From The Stars Volume 2', an album full of disco and synthy-themed cover versions from obscure and not-so-obscure Science Fiction. We must be out of our interstellar minds. Things open up with the sweeping oscillators from Sam Annand's analog synth collection in his cover of the Blade Runner opening credits. Next we take a 5 year leap back in time to mid 70's, ITV kids TV show 'The Tommorow People' gets a synthy work-out from new Tirk dub-vendors Skintologists, 23 Skidoo drum man Fritz getting behind the beat on his drum set. The recent single from super-disco duo Bottin and Rodion is next, their 'Shooting Star' supernova-ing all over an Italian dancefloor near you. It's nice to see even more fellow countrymen getting together in the studio, this time it's a debut recording from the dons of Slovenian Nu-Disco: Sare Havlicek and Ichisan. Ichy is on the guitars and Sare is doing a quirked-up, elevator-music groove on Queens 'Football Fight' from Flash Gordon (the 1980 movie). We think it is impossible to listen to this one without smiling ;-). Sportloto gets even more analog with his try-not-to-cry cover version of French Maitres du Temps (don't worry he didn't cover the real tear-jerking one, just the main theme). Off to Belgium next. For those of us who used to watch the US TV version of Flash Gordon; remember the cringe-worthy scene where Buck asks the Princess to 'get down and boogie'. The band then obliges and makes up a cheesy synthy groove on the spot, of all the tracks to pick, typical that the Belgian duo Martians zone in on that one. We were just jealous we didn't suggest it first. Bidi Bidi, Bidi whats up wit dat Buck? UK based Mick Wilson in his SCBC guise manages to finally find the elusive Blake in his stabby, synthy, poptastic cover of 'Blakes 7'. Ken Lockie (Of Cowboys International and Dominatrix fame) does a perky twist on Japanese classic 'Ultraman'. Free School are next as they warm up their chillwave synths for a nicely toned cover of 80's low-budget-big-payback flick 'Hardware'. Back to Slovenia where Nakova dips his tone into the sea of synth craziness with his 'Aquaman' cover. Proceedings close out with more talented Italians, Ajello takes on the psychadelic-lounge of Andre Previn's 'Executive Party' from Rollerball and Love Supreme close out with the glorius them from the Russian Sci Fi classic 'Solaris'. Get the demos in for Volume 3. As you can tell we really don't know how to throw the towel in when it comes to galactic musical japes. The NANG mob.

From The Stars Volume 2