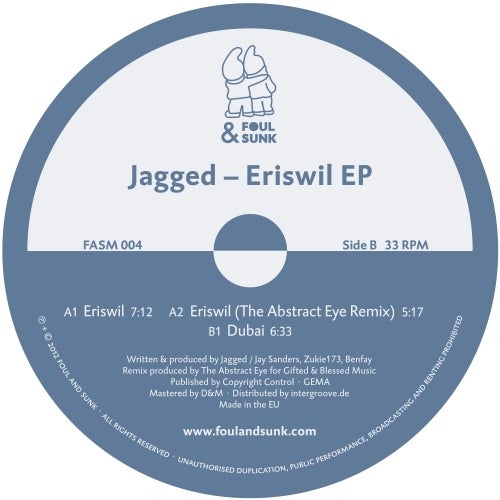 Eriswil EP + The Abstract Eye Remix* (*known from the latest EGLO!!) Support by: Jimpster, Finn Johannson, D.Fine, Moodymanc, Show-B, Alex Dallas, Dirk Rumpf, Charles Webster,.. Foul & Sunk, the Swiss-German House-imprint based in Freiburg and Zurich, rings the bells for round 4 with the Eriswil EP by Jagged, a spunky release that blushes your cheeks like a strong sip of Bernese apple brandy.And Bern is the code word that sheds light on the origin of Jagged: behind the name hide three veterans of the swiss house music scene - the DJs and producers Benfay, Jay Sanders and Zukie173, who emerge from the vicinity of the now discontinued Freestyle label "A Few Among Others", whose founder was Zukie173. As Jagged, they are releasing house music built upon hard-hitting drums, sinister bass lines and soul-drenched instrumentation for over four years by now. They debuted on Quintessentials with "Hello Kool Nice" in 2008, and didn't lose their gritty energy since then. Now, they're back on Foul & Sunk with "Eriswil", a deep rolling, dark monster that also gets a remix-treatment by The Abstract Eye?