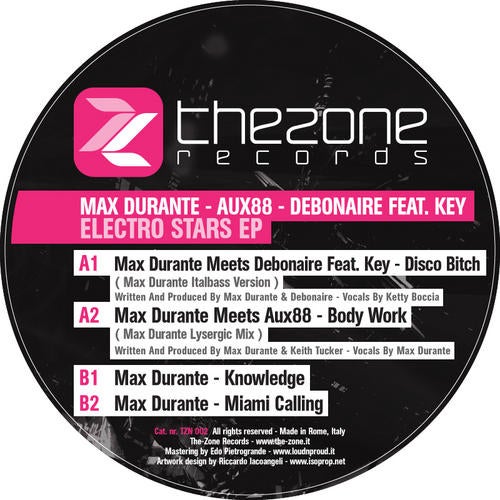 The evolution of the history of music to Electro and Miami Bass response ITALIAN is the protagonist in the second release of The Zone Records
Side A is signed by artists, experimenting in the 80s and low 90s drum machines and synthetic, have given rise to new musical forms, still points of reference for the new generations, respectively defined Electro-Techno and Miami Bass. From the industrial city of Detroit Michigan, Aux 88 transformed the Afrikabambataa’s electro funk on techno sounds from the world originating in their city. While in Florida ("Planet of the bass") Debonair has skillfully combined the American Rap with the imposing German electro bass power, voice and scratch, creating an explosive groove for the dancefloor. Two tracks in collaboration with their friend and one of the highest electro pioneer made in Italy, Max Durante, who knew how to mix low rolling, electrical items and broken beats recreating setting really old school.Ketty Boccia is the featuring appear on track with Debonair and Max Durante ,she is an important figure of the Techno-Electro Italian movement.
The B side is all signed by Max Durante. Two tracks , the expression of what has always been the bridge between the musical sound of Detroit and Rome