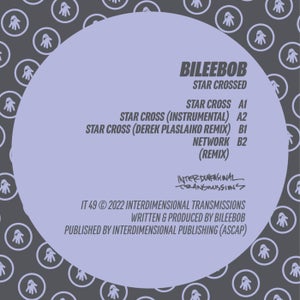 Bileebob was living in the lofts at 1217 Griswold when I first met him, this is one of the seminal places that the post Music Institute Detroit scene grew out of. People who lived there performed or threw parties in their lofts for rent money, other people living at 1217 included Buzz Goree, the founders of Paxahau, De3n System. Bileebobs an amazing and unique part of the Detroit scene, having created music and art for years, performing locally and internationally as a member of the Detroit Grand Pubahs and UR, releasing on Underground Resistance, and had a regular zine for so many years. When he sent us the promo for Star Cross from his personal Bandcamp page, we loved it, and for the second No Way Back stream both BMG & Derek ended up playing it. We just loved the song, so we asked him if we could give it the full release, and we had Derek Plaslaiko remix it. Weve included an unreleased amazing tough electro mix of Network, a song currently on his Bandcamp page. Digitally weve included another more raw mix of Network and an after the after party 1217 kind of comedown jam Club Kid Up All Night.