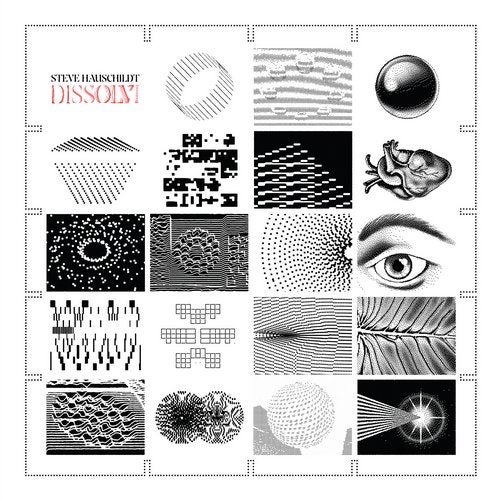 In search of the sublime, contemporary electronic musician Steve Hauschildt has designed grids and panoramas of sound across multiple releases through the rise and dissolution of his former band, Emeralds, an American touchstone of 2000s home-recorded psychedelic noise music. Consistent with his solo work is Hauschildts ability to coil his craft in precise, varied, and distinctly physical forms. Gently spinning arpeggios converse with post-industrial decay. Sonic fibers sway like pendulums from static melancholy to motorik bliss. Dissolvi, the artists first full-length with Ghostly International, engages sublimation from an ontological perspective: by dissociating the self. As a result, his most collaborative work to date extends a vast, vibrating framework in which to consider the state of being.

The album's title a reference to cupio dissolvi, the Latin phrase meaning "I wish to be dissolved" needn't be taken one-dimensionally or as purely solipsistic. It does, however, serve an apt reference. Physiological phenomena are of interest to Hauschildt. These back-of-mind ruminations find their way out. Songs are cerebral in orientation, but beyond explanation, the music is truly visceral. Involuntary eye movement inspires the serene, sanguine-nearing-suspicious "Saccade." Hauschildt feathers soft percussion beneath the echoed refrains of Los Angeles musician Julianna Barwick, together shaping a svelte suggestion of the anxieties brought about by modern-day surveillance; if everyone is being watched constantly, there is no individual, no self, only a broadly monitored and clumsily cataloged populous. The work of Chicago poet Carl Sandburg comes to mind: I am the peoplethe mobthe crowdthe mass. The individual dissolves into the taxonomic crowd.

Minimalist techno impulses provide a stylistic through-line for Dissolvi. Understated synth phrases and drum grooves take hold in selective moments, like synchronistic structures onto which nebulous mists, like the rapturous voice of Gabrielle Herbst aka GABI on "Syncope," cling to and cloud, producing a dazzling rift in consciousness. The 7-minute centerpiece "Alienself" reiterates this creative logic, burbling like an amorphous body of water on a low-gravity planet, on the verge of dissolving, but never fully dematerializing.

The album was constructed in Chicago (where Hauschildt now resides) and partially in New York. "Much of it was recorded in a windowless studio which removed elemental or seasonal references to time in the music," says Hauschildt. "The focus this time was on mixing the album and incorporating a broader set of instrumentation. I describe my compositional approach as being quasi-generative." Embracing new methods and philosophical curiosities, and in turn, expanding the range of his repertoire, Hauschildt proposes a fascinating and profoundly rich experience in listening, being, and deliquescing.