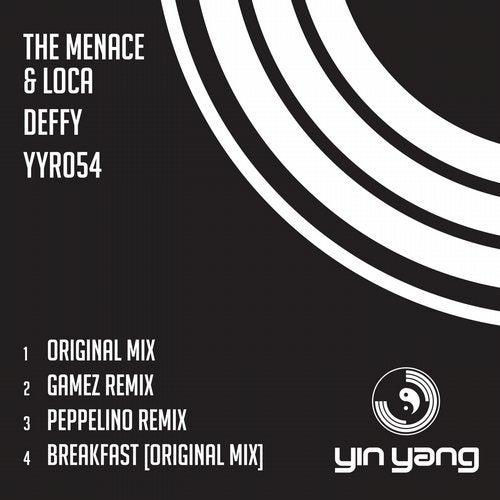 The Menace & LOCA are a duo from Scotland. LOCA has headlined events with the Chemical Brothers, Fatboy Slim, Eddie Halliwell & Fergie to name a few. She is one of the biggest female DJ's in Scotland and is constantly flying across to Ibiza to play at some of the greatest nights on the island. Menace is the engineer and has has the broad skills of constantly writing and engineering tracks for big name artists, whilst LOCA is the circuit DJ. Now they are appear on Yin Yang with two great tracks, Deffy and Breakfast. Both are nu style techno tracks that build and drop to the appreciation of the dance-floor crowd.. Fantastic tracks.. Yin Yang enlisted two of its resident producers for the remix work, giving the release a slightly different varied techno appeal. First up comes the almighty Ganez, known for his tougher edge style of techno, he comes up with a great groovin' remix that keeps a lot of elements of the original but beefs it up. Slower than usual for Ganez, but keeping his signature sound in check. Great work. Secondly is one of Yin Yang's original producers that is back with a vengeance. Peppelino with an absolutely jaw dropping remix. Taking the original elements, he chews it up and spits it back out with a sexy ass killer remake of the track. Much darker than the original.