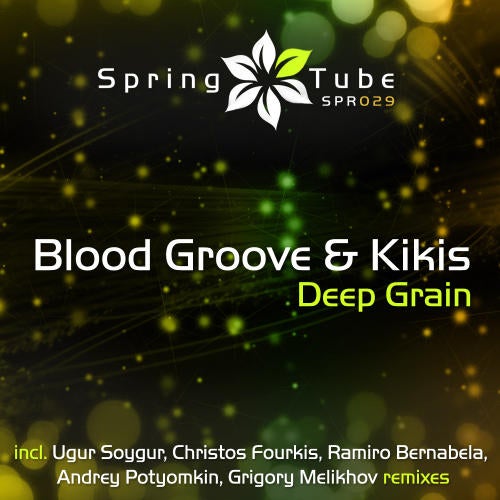 It's time for our label to present the last and the biggest single from remixed editions for the works originally released on Spring Tube's first sampler back in April 2010. "Deep Grain" by Latvian duo Blood Groove and Kikis became one of our most beloved and memorable tracks, and we are pleased to introduce you five great remixes on this theme.

Following the original version is the first remix by our good friend from Turkey - Ugur Soygur. Established producer and DJ, frequent guest in Spring Tube Session radioshow, now finally is welcomed in our artist roster with this pure classy work.

The second remix on this release and also the second remix-work for our label in general is by Ramiro Bernabela from Netherlands. Once again amazing modern and stylish sound under this name, which definitely should been followed.

While we prepare his "Emotion" single, which will be out later this year, other our good friend - Greek producer Christos Fourkis - presents the third interpretation on the original theme, in the best traditions of his unique sound-manner.

Next up is version by Andrey Potyomkin from Kazakhstan. We are still in love with his "Surfaces Of Midnight Lakes" remix, which has appeared exclusively on our 1st Anniversary Compilation, and this work proves again his ability to feel the material in a true way.

The last remix comes from new artist to our roster - Grigory Melikhov from Russia. Young and very talented producer shows his skills on the full. Quite extraordinary and certainly intelligent sound.

This all is the final from remixed editions for the brightest works from our first sampler and we are ready to present its second issue with lots of pleasant surprises, so do not miss our next release, but now enjoy this one!