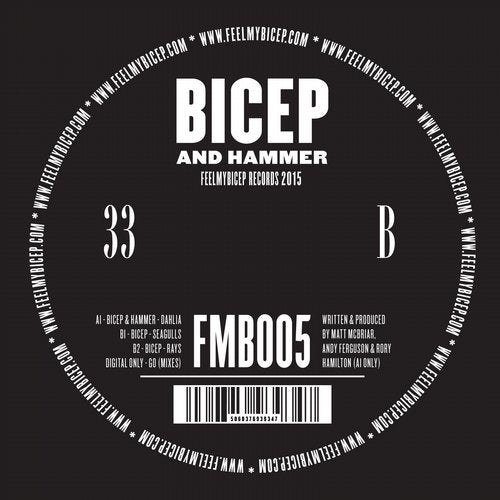 Bicep make a return to their own Feel My Bicep imprint in the wake of their lauded AUS Music anthem 'Just' and their remix of Dyone on First Choice Records. Having released a series of sought after 12"s on FMB the London based duo continue to prosper and make a solo return home with their 'Dahlia' EP teaming up with school friend, gym buddy and blog partner Hammer aka Rory Hamilton.
Having began as erudite record collectors and now an inimitable production force, the Belfast born Andrew Ferguson and Matthew McBriar have built a signature sound through an arsenal of hardware and a penchant for skippy rhythms and heartfelt synths. For FMB005, the pair deliver 5 five new house jams that fans, both old and new will relish: a package of potent analogue drums and sequences that are coloured with a signature degree of swooning melodicism.
The title track kicks things off with a mournful panned pad that lays the foundations for whetted percussion and a buoyant thud. Hats continue to scurry ahead of rapturous piano stabs that build towards a heart-rending chord and vocal combo. 'Rays', inspired by early morning sets at Panorama Bar, sets a bass pattern tumbling under a crunching percussive loop and dramatic, reverberated synth stabs. Dreamy vocal chops build momentum behind a minor-key shift that signals another rousing breakdown before 'Seagulls' then sets shuffling snare rhythms over whistling synths and a rich, filtered bass pattern.
Both mixes of 'Go', inspired by the same studio session as "Just" then mark the introduction of FMB's digital availability. These digital exclusives will now be available alongside the rest of the FMB catalogue - exclusively through Beatport for 2 weeks and subsequently in other digital outlets.
The 'Flanger' mix uses tangible filters to drive a circling sequence of broken drums throughout while a short vocal snippet adds an urgent edge. The 'Liquid' mix melds spacey pads and squelching resonance control into an altogether more mellow affair that caps off another fine addition to the FMB series and begins a new chapter for the label's operations.