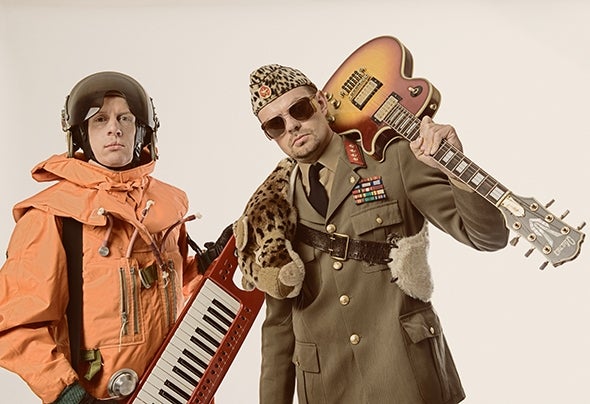 Both born in 1979, Helsinki, Finland based Style In (Lauri Kasti) and Dynamov (Lupu Pitkänen) formed a music group called Ural 13 on Friday the 13th of October 1995. During the following couple of years members of the group released over one hundred techno and house tracks. This computer based tracker music was published as open source in BBS-systems using modems, before the wide usage of Internet.European techno movement of the 1990s and Chicago house music were the main influences for the computer music of the Ural 13 group. But in 1997 Style In and Dynamov found some old Hi-NRG disco records and were impressed by the futuristic soundscapes. They realized that the roots of techno music were not in Detroit but it had been developed much earlier in the hands of Hi-NRG producers. One good example of this was Patrick Cowley’s Tech-No- Logical World from the year 1982.Style In and Dynamov had a vision of combining old Hi-NRG disco and modern techno and decided to call this new style as Sound of Helsinki. They took also influences from the traditional Russian songs. That way the style would reflect the position of their hometown between east and west. Style In and Dynamov decided that the computer music scene would not be enough for realizing their visions and so in 1997 they formed a band called Ural 13 Diktators. Visual image of the band combined soviet nostalgia, rave culture and mirror balls from the disco era.The first steps were not easy for Ural 13 Diktators. Their first vinyl record Diskossa EP was released under the band's own Ural 13 Records on Friday the 13th of February 1998, but at first it didn't have any distributors. There were very few people in the conservative techno scene who understood what this sound ahead of its time was about. Through a local record shop Ural 13 Records was finally able to sell one hundred copies of the Diskossa EP to the Berlin based Hard Wax record store.Surprisingly rest of the batch of 500 records was sold out in Germany very fast. Ural 13 Diktators were approached by many European record labels and Ural 13 Records signed a distribution agreement. In the year 2000 in addition to their own record label the Swiss based Mental Groove and the German labels Lasergun Records and Forte Records released Ural 13 Diktators' records. Christian Morgenstren's (1975-2003) Forte Records released the band's first album Total Destruction. The album and the single of the title track sold over 10.000 copies. The success of the album sealed the band's breakthrough in Germany and Japan.In the summer 2000 Ural 13 Diktators performed live in Berlin, first time outside of Finland. This started continuous touring lasting for many years, during which the band performed in dozens of clubs all over the Europe and Japan and also in many of the biggest techno events in the world. In the year 2001 Ural 13 Diktators performed live in the Germany's legendary Mayday and Love Parade events and in the Japan's biggest techno event Wire.During the years 2001 and 2002 Ural 13 Diktators still released many vinyl records and were making numerous remixes for other artists. The band wanted to develop their style further and continuously made changes to their sound by taking influences from old computer and game music, EBM, rock and pop music. As the climax of this fusion, Ural 13 Diktators released their second album Techno Is Dead under their own record label in 2002. T he album was distributed by Rough Trade which was owned by Sony and later BMG and it sold almost 10.000 copies, mainly in Germany and Japan.The title and song lyrics of the Techno Is Dead album reflected well how Ural 13 Diktators saw the future of electronic dance music and the music business in general.A couple of years earlier their visions of developing the 1980s musical innovations further were not accepted but now the Electroclash movement tried to quickly cash in by blatantly copying the soundscapes of the same era. Because of this development and also because Ural 13 Diktators were erroneously included as a part of the Electroclash hype, it was very difficult for the band to be motivated for making music.After the year 2002 Ural 13 Diktators made some occasional remixes and continued touring in Germany until 2006, but no new material was written. After deciding to take a break the band members were concentrating on their own projects.In October 2011 Ural 13 Diktators returned from a five year break for one single night to make a special soviet themed performance at Helsinki Cable Factory in the Alternative Party 2011 event.After this show they decided to release new material before the end of 2013.Ural 13 Diktators comeback single "Tivoli" will be released on Friday 13th December 2013 as 12" vinyl and digital (Ural 13 Records U13008).