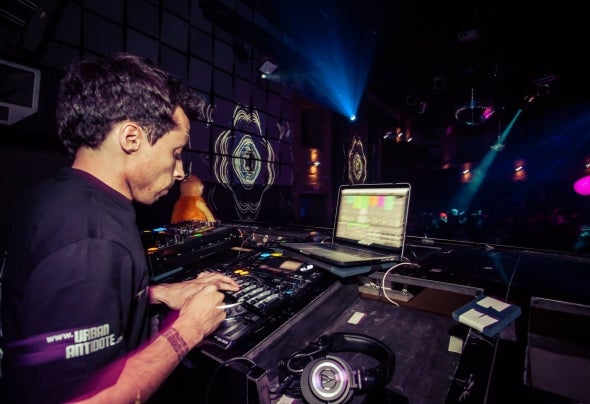 Igor a.k.a TerraTech, very early became interested in electronic music and began his search for different styles of Psytrance Music around the year 2001.The first steps were taken by private parties and local clubs in Portugal, so then the tendency for mixing was the beginning of knowledge, and lately in 2005 they were the basis to create his solo project under the name TerraTech.After his first experiences and deep productions, many tracks were been released on several labels well known in the underground scene, as Urban Antidote where he is the head of the label since 2010, Insomnia Records, the Russian Psychedelic Pioneers, Lycantrop from Belgium, Bhooteshwara, this great Macedonian Label, OmVeda from India, 2to6 (The well known old Kabrathor Records), Deviant Force, the talented night time label, Mind Expansion (Psycrowdelica Family with Love), and more, just naming a few.With more than a decade in the psychedelic scene, many regular performances all over the Europe, Asia, America, and in Big Festivals like BOOM in Portugal, Psychedelic Circus, Psycrowdelica, Odyssee, this three in Germany, UFO-Bufo in Czech Republic, Andra Vaerlden (Sweden) Waha (Romania), and so on.TerraTech sound is been designed with a dynamic feeling, diving atmospheres, specially involved by organic and cosmic sounds, a moment to explore all your deep emotions at a dancefloor, original production based on all aspects of psychedelic domains.This last years Igor compiled many releases at Urban Antidote where hes been active since then, Optoplanar was the name chosen for the first one, Renewal, the second one wich was the best seller of the label, Modulating Architects (Along Dj Amazon) the third one, TEN, the number four, this last one was particularly to celebrate the 10th anniversary of the label.Nowadays many projects are running to come out in 2018, specially a Split Album and some Compilations by the label (Urban Antidote), stay tuned for the surprises!