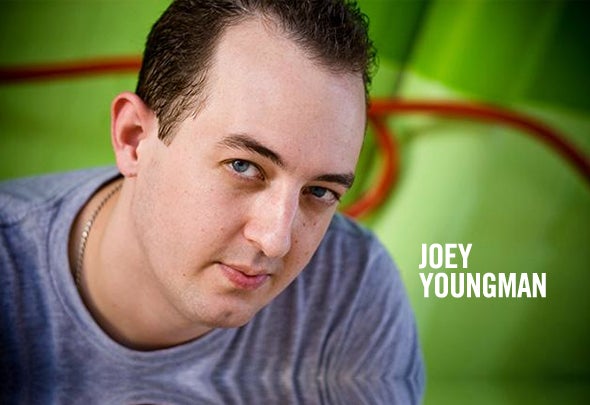 Joey Youngman has emerged as one of underground house music’s most prolific producers. The DJ, producer and A&R of Fetish Recordings and Jackin Tracks has influenced the future sound of house music through hundreds of releases. At just 24-years-old, Youngman’s classically trained musicianship and natural gift for crafting a funky, disco-infused sound have already placed him in the top tier of global house talent. Youngman’s passion for his craft constantly fuels his creative energy. “The first time I heard electronic music, I felt like I was looking at the world from the outside,” says Youngman, who attended his first rave in his hometown of San Luis Obispo, Calif., when he was 13. Unlike other club kids who embraced the music by way of the rave scene, Youngman says the music found him before the scene caught hold. The drug-free experience enlightened him. “From the moment I heard that first mix tape and saw that first show—it was my mission in life to create house music,” he says. Youngman sent out his first demo when he was 13; by the time he turned 16, ’90s-heavy house labels such as Nervous, Distant, and Moonshine had his music in hand. Youngman began backing his demos with DJ gigs at central California clubs where he showcased catalogues of original tracks. 2003 saw his production style evolve from a filtered, French-disco sound into a slower brand of deeper, funky house. His first track from the new era, “Luv Bump,” emulated the classic sound of Derrick Carter and earned him his first release on San Francisco’s Good Family imprint. “Luv Bump’s” success also landed his name on a slew of other West Coast house labels, including Nightshift, Doubledown, and Om. In early 2004, Youngman took another step forward in his production career by launching his own label, Fetish Recordings. He created the imprint to release original tracks, along with several EPs under the artist alias, Mario Fabriani. Later that year, Youngman made the decision to pursue house production full-time and signed onto the esteemed Blue Collar Entertainment roster. The move sparked a series of global tours and increased his exposure to audiences around the world. In late 2004, Youngman launched his second label, Jackin Tracks, and moved to Austin, Texas,, where he continues to redefine the conventional boundaries of his music. “When I’m making music, I’m picturing that last great gig I played at,” Youngman says. “My inspiration always comes from my live shows.” Youngman’s sound is characterized by bumpy, funky basslines, drums and the “dirty disco” sound that has reemerged in his production work over the past year. He is credited with helping ignite the “New School Jack” movement that continues its rise on the Midwest and West Coast. “I’ve crafted my own style that still has the elements of all my influences.” he says. While Youngman keeps exclusivity with Fetish and Jackin Tracks, he continues doing selective remixes for labels including Om, Naked Music and the occasional boutique imprint. In 2005, he stopped selling original tracks to concentrate on the development of his own labels. The result? Fetish Recordings and Jackin Tracks stand as two of the top selling names in underground house music. “I am living the way I always dreamed I would be living,” Youngman says.