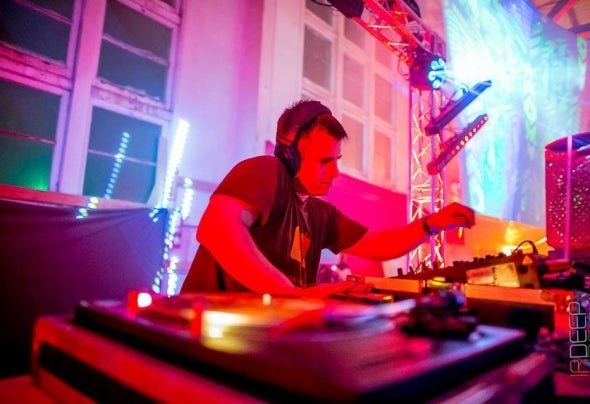 Orlando native Jayson Butera established himself in the Underground Dance scene by mixing a variety of Progressive House, Trance and Nu Skool Breaks. Jayson career began in the mid 90’s by working at local record shop in Orlando. From that point his love for electronic music progressed and turned into a deep rooted obsession. After receiving his first residency at Daytona nightclub Sol-Rays in early ‘98, it seemed like it wasn’t much longer before he found himself playing just about every nightclub in Central Florida. Around this time, he met up with DJ Trancelott of Trancedomain.com, a weekly internet DJ Broadcast featuring DJ’s from around the globe. He soon became a resident of the show, and went on to play alongside Trancelott for many guest spots throughout Florida and the US. By 2000, Jayson began his first Orlando residency at the legendary Club @ Firestone. With this new success, he joined forces with 720e and their weekly show, Kompression. Here, playing alongside moguls such as Vicious Vic, Noel Sanger, Chris Fortier, DJ Trancelott, and many others, where he established his own style and sound. By New Years Eve 2001, Jayson marked another career milestone in the International spotlight as he played Calgary, Canada. Soon after returning, he headlined one of the biggest parties of his DJ career in Panama City, Panama. On his return to the United States, he continued to progress his Orlando residency and has had local radio appearances on 93.9 Dance and 91.5 WPRK. His resume includes several internet radio stations from Breaks FM to Pulse Radio, Bijou Breaks, Eccentric Beats and more. In late 2005, Jayson competed in John Digweed and Future Music’s “The Next Big Thing” DJ contests, in which Jayson was a top finalist. He also received a top 3 finish in Mercury Server’s first annual DJ competition. From there, He, with the help of Mercury Session, founded his own featured radio show called “Beyond Boundaries”, airing every other Monday at 10:00 pm EST on NSB Radio and as co-host of Progressive Sundaze with DJ Fastbinder. These days Jayson Butera occupies guest spots all over Downtown Orlando and other guest spots across the Nation. He continues to move Orlando with his dark Progressive House and Progressive Breaks.