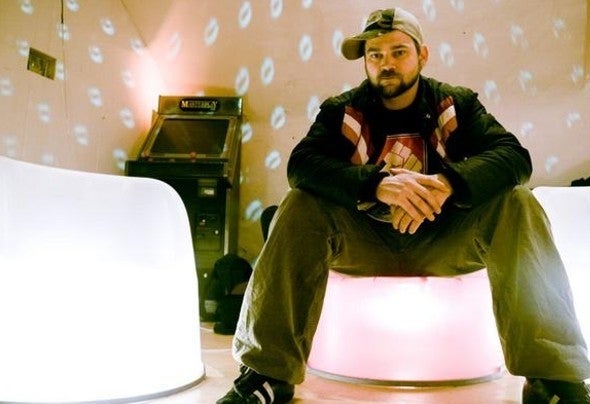 Cosmic Force is a long time player in the worldwide Electro scene. Not an artist who transformed from one sound to another, he's one of Electro's originals ! Like so many kids of the 80's, Cosmic Force was influenced by the emergent street culture of New York, especially the Electrofunk movement of Hip Hop. Cosmic Force expanded his musical tastes with the more experimental music of Pierre Henri, Oscar Sala and Kraftwerk. After playing around with tape recorders and borrowed turntables, CF started his musical experimentation for real when he started buying modular systems and really morphing the sounds he had. Once alerted to music making potential and an immersion in Syntheresized music, He then started his collection of original analog synths and along with his 808, created his own brand of street tuff Electro. Picked up by CLONE RECORDS when they first launched after hearing just a couple of his tunes, Cosmic Force released many classic trax on this world renowned label before setting up his own much celebrated label, MARGUERITA RECORDINGS and releasing his own material alongside the likes of DETROIT IN EFFECT and E8. Not just a solo artist, Cosmic Force has collaborated with the likes of Dexter, E8, Random XS and AUX88's Keith Tucker to expand his brand of Electro and morph his style with that of others to create original recordings from a shared mind space. With regular live gigs in his home country of The Netherlands and his own monthly Club Marguerita in Utrecht, Cosmic Force continues to rock sound systems around the globe in such places as Belgium, Germany, England, Scotland, Sweden, Spain, Miami and a prestigious appearance at Detroit's FUSE- IN festival. With a growing roster of Artists joining MARGUERITA and continued output including a new and continuing ACID project with Club 030303, COSMIC FORCE continues to deliver quality recordings of his own no nonsense Electro, Ass kickin live sets and a rammed club night.