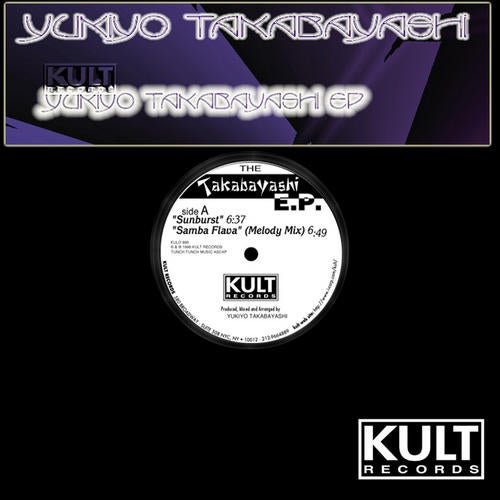 At long last, were finally able to break the gender barrier with our first female producer, who comes to you the land of the Rising Sun. Yukiyo Takabayashi trained pianist with 15 years of experience, she has been composing house rhythms for the last 5 years, Yukiyo has been influenced by such producers as MAW, Sensory Productions, Basement Jaxx, Ron Trent, and Grant Nelson, to name a few, Her piano work and arrangements are some of the best weve heard, especially from, a newcomer. This Brazilian flavored E.P. is uplifting deep house offering, rich with colors and textures that wet the palate. So if your really a Dj who stands apart from the pack, then this is the record for you, Heavy Club and Airplay is expected, so dont just stand there reading this piece of paper; put it on the turntable immediately and turn it up LOUD!!! .

The buzz activity on this is simply amazing. Heres some of the things people in the Industry have been saying about Takabayashi: Larry Flick, (Billboard Magazine Sept, 28th) says she gives dub-happy DJs a reason to smile and Samba Flava.... Kevin Donaldson, Billboard reporter and reviewer for VybeMusic puts it like this. This is the record Ive been waiting to get all year! Now its here and more pumped, musically, than any hard house record...Get it NOW!!! Paoline Bova of Italia Network Radio says Welcome to Takabayashi in this world of house!!!... You are my favorite!!! Saadir, resident DJ at the House of Blues, New Orleans and radio jock for WWOZ 90.7 FM says Best Hose release of 96!!! Simply magnificent. I love this dearly. This is House Music!!! Margaret DJ Mags Coble, reviewer for DMA and Impact News states Love this - Gotta support the sister!...Will definitely reviews!!! Anand Raju of Groove Institute's Mixshow 99.1 FM Ontario, Canada says The best smooth release on Kult to date!! Hippie Torales, International DJ, producer and remixer says Great, with a capital G!!!... Top 10 charting from me. Ed Gusto Greene of Discos Revenge fame feels like this: Very Impressive...Better watch out for this girl...Keep it Rockin!!! Willy Vela, columnist for DMA Magazine and Winter Music Conference coordinator says Works well late!!!...Sunbust keeps them on the floor!!! DJ Marvin Murray of WEAA 88.9 FM in Alexandria, Virgina puts it This E.P. makes a statement...Yukiyo may have what it takes to stay for a while!!