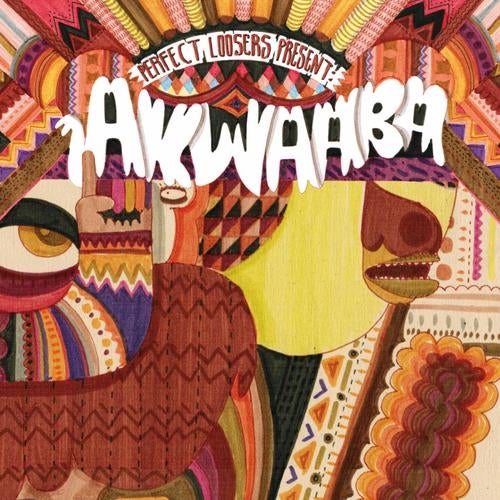 ALL STORES EXCEPT ITUNES

It all started one year ago, Akwaaba head dood Benjamin Lebrave met up with the Perfect Loosers in their studio right outside of Paris. He came with a mountain of songs by Ahmed Fofana, Baba Salah and Onyenze. Treasures he d accumulated on his travels to West Africa. And he met an enthusiastic trio: Waly had been fed Tunisian music since birth, Mast grew up listening to his Congolese step dad s addictive soukous jams. He also ripped walls with Paul, his head filled with the Caribbean sounds of his parents.

At the time, the Perfect Loosers had already made a remix for Angolan kuduro artist Ze Bula, but clearly they were hungry for much more. And it really didn t take much for this impromptu meeting to give birth to yet another project in the Akwaaba constellation: With such a diverse musical background, connections in the international DJ and club circuit, and the skills to create dancefloor killers and the artwork to go with it, the trio agreed to go a few steps beyond remixing, and piece together a full length compilation where Africa would meet the club.

The concept is to let artists and producers from around the world rethink handpicked, eclectic West African songs. With one rule: staying away from bland, uninspired world music remixed releases. Instead tapping into a bubbling scene of up and coming artists, not only receptive but more importantly inspired by music from Africa.

The stems were a mess, the artists had jam-packed schedules of projects, yet month after month, the album took shape. The result is a diverse blend of club aesthetics and African tradition. Not some trendy, artificial music: it is the sum of creations by original artists with deep musical roots. Artists from Europe and North America - as usual, but also from Africa itself, Latin America and the Middle East. Pushing Akwaaba s mission further in connecting the dots between artists and music lovers around the world.

Ahmed Fofana (Mali): an incredibly talented multi-instrumentalist, we featured Ahmed s work on our very first release, Akwaaba Wo Africa. When we met with him in 2008, he shared a few instrumental takes with us, which display his versatility and meticulous sense of rhythm. We are thrilled to have enabled for these tracks to move into entirely new directions.

Baba Salah (Mali): a very familiar voice in Mali, Baba has established himself at home as an unavoidable voice carrying the rich Songhai tradition. He has toured his home country time and time again, he is a regular performer at the Timbuktu Music Festival, yet his visibility outside of Mali has been extremely limited. His voice and guitar playing are incredibly melodic, as featured on our first compilation Akwaaba Wo Africa.

Jali Bakary Konteh (Gambia): the son and grandson of globe trotting, celebrated kora masters, Jali blended his rich musical heritage with western sounds and arrangements to create his acclaimed first album, Konteh Kunda in the Spring of 2010. Akwaaba has also released a handful of remixes of his afrobeat flavored jam Combination.

Onyenze (Nigeria): heir to the rich Nigerian Igbo highlife sound, Onyenze has been following in his uncle's footsteps, the legendary Chief Stephen Osita Osadebe, who passed in 2008. Onyenze is one of the very few artists who has been able to record a full highlife band in Lagos, making his international debut, Livin Dey Highlife, a groundbreaking release. His funky beats and catchy hooks seduced plenty of producers, this is - as far as we know - the very first time highlife is reinterpreted by such a wide range of artists.

X-Pensive Nframa (Ghana): a mysterious, practically unknown musician even at home in Ghana, Akwaaba met Nframa on our very first trip to Africa in the fall of 2007. It was a random encounter, and since then Nframa has completely quit making music. We still love his flow and wanted to release this intersting remix, an unusual arrangement of twi raps over a more experimental beat.

Chief Boima (USA): if Akwaaba owes anything to anyone, it is to Boima. He was a supporter even before we launched, he put us in touch with our first circle of DJs, artists and bloggers, and it is a huge honor to feature his work on this release. A human encyclopedia of all things revolving around music and Africa, Boima has been contributing to influential blogs such as Ghetto Bassquake and Africa Is A Country. As a DJ he has been setting crowds on fire from Stockholm to Freetown to Barranquilla to Oakland. And as a producer, he brings his deep, deep knowledge of African music to the people. You could call it... Techno Rumba as pinned by his EP out on Dutty Artz.

Dance Kill Move (Colombia / Sweden): what happens when you take a Colombian bathed in cumbia, champeta, vallenato or reggaeton, and force him to spend his winters in Sweden? Nostalgia will surely get the best of him, the biting cold will get under his skin, unless he finds a potent remedy: the only way out is to recreate the moist, tropical beats of his homeland. That s Dance Kill Move. Winner of our Miss Doctor remix contest, they took 4x4 s dope Ghanaian afropop vocals and mashed them up with an infectious cumbia / reggaeton beat. Atlantic reunion, we love.

Diamond Bass (Portugal): the social and historical context in Portugal makes it hard to avoid the abundant links to Brazil and Africa. With years behind the decks at major Lisbon and Porto clubs, Diamond Bass has successfully risen as a master blender of traditional rhythms within a full-on club aesthetic. Your head might start spinning as you listen to his remix of Nigerian Igbo highlife heir Onyenze: no, you are not in space. With an EP coming out soon on Buraka Som Sistema's Enchufada label, this is a household name in the making.

DJ Djeff & Silyvi (Angola): another remix showcasing the strong links between Angolan tradition and club world aesthetics. Both Djeff and Silyvi grew up somewhere between their parents classic Angolan tunes and bass-pounding clubs in Portugal and Angola. After years as residents at top clubs in both countries, they recently took time in the studio to expertly build deep-house tracks with an even deeper sensibility for Angola s rich musical heritage. We are proud to feature their re-interpretation of Onyenze's traditional Igbo highlife.

Filipe Narciso (Angola/Portugal): Filipe grew up in Angola, the son of a Portuguese mother and Angolan father. His dad being a big music nut, Filipe was raised immersed in music and dance, so when he moved to New York to study sound engineering, he had the musical knowledge to turn his studio skills into inspired musical gems. Now based in Lisbon, Filipe DJs zouk, semba or kuduro, but also makes deep house tracks such as this great remix for his homie DJ Djeff.

Hat+Hoodie (Germany): The roughest places have always triggered the most exciting music. The favelas, barrios, townships and ghettos of the world have given birth to countless musical styles - a hardly avoidable phenomenon for this power duo, who have established themselves as an unavoidable destination, both for their popular blog and their intricate productions. 2010 saw them touring and collaborating with artists from around the world. They also found the time to take Jali Bakary Konteh s afrobeat kora jam to another galaxy. Combination - the name is perfectly fitting.

Jokers of the Scene (Canada): Every artist claims to defy categorization. Yet for Jokers Of The Scene, it's not a boast - it's a lifestyle. For the past few years, Jokers Of The Scene have ranked amongst the brightest, weirdest lights of Canada s dance music renaissance. Between their Fool s Gold originals and their enviably deep remixography, the duo have passed on a signature sound to craft an unpredictable approach that's as cerebral as it is speaker-decimating. Here they take Ahmed Fofana, and as expected, turn it into a deep, powerful journey between Africa and your guts.

Lazy Flow (France): a former drummer with an interest in percussion from around the world, this guy makes you change time zones without the jet lag. Lazy Flow is an experimental producer in constant search of sexuality and rhythm. The air becomes humid, your hips move, girls are beautiful... it s Lazy Flow baby.


Max Le Daron (Belgium): Max first came on our radar one year ago, when he did a great mixtape promoting Killamu s kuduro album. Another kid growing up on baile funk and booty beats, Max has quickly risen at home both as a rave DJ and a meticulous producer: you can hear the sound engineer in him, and more importantly you can hear his tropical influences around the corner. This remix shows him more mellow than we've ever known him... savour it while you can!

Perfect Loosers (France): take a graffiti artist, a fashion designer and a crafty DJ and beatmaker. Let them brew their diverse musical heritage in Paris club scene. After a few years of simmering, the trio is finally distilling perfection within decadence. This project is their brainchild: the search for musical perfection, a knack for dope visuals and in-your-face eff-you attitude. We owe the great visuals to them - and the overall approval for the unfugwidable line-up of up and coming beat wizards.

Sabbo (Israel): a familiar name for Akwaaba heads. With roots in dancehall and the curiosity and energy to drive him towards global strains of dance music, Sabbo has been a full supporter and active contributor to the Akwaaba family. We just can t get enough: we ve released his Ze Bula and Miss Doctor remixes, and asked for more with yet another rework of Onyenze s masterful highlife sound.

Schlachthofbronx (Germany): Bavaria? Not just beer and expensive cars. Nope, with roots in dancehall, hip hop and a hefty dose of bass-heavy music, Schlachthofbronx have risen on the global scene with their insanely powerful releases for Man Recordings and Disko B, and their unbelievably abundant collection of remixes and collaborations with artists from around the world.