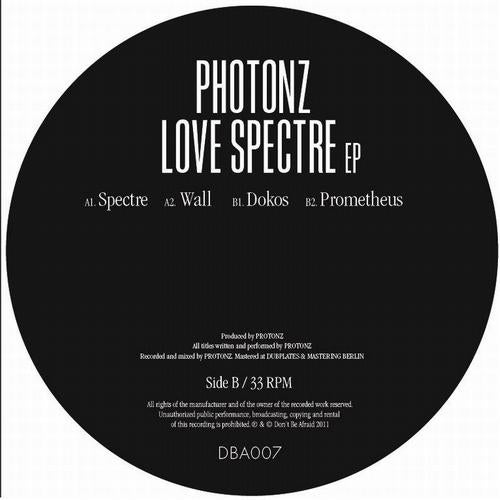 Photonz have taken no prisoners in 2011. Following their dancefloor destroying third release on One Eyed Jacks alongside Tiago they up the heat yet again with a first outing on Don't Be Afraid. Spectre is surely destined to please fans of Oni Ayhun, Joy Orbison, and other forward thinking house music producers alike with it's jaded xylophone hooks and cold as ice groove. Wall is a slice of trademark Photonz Portuguese acid, an infinite groove that builds and builds. Dokos is a more downbeat, tracky number which will slot nicely into the sets of DJs who favour the old school house sound of Chicago and Detroit. Prometheus catches the pair at their most experimental, upping the tempo and unleashing an ambitious techno juke roller which is as much Machinedrum as it is the sound of 1990's techno circa Pacific Records and Plink Plonk.

Markur and Rhodes aka Photonz have been delivering their trademark crunchy psych techno on several releases for London labels Living and Dissident as well as Pilooski's D.I.R.T.Y. for some years now, turning the heads of glitterball grandees such as Trevor Jackson, Gerd Janson and DFA's Justin Miller. With two sizzling remixes out for Anthony 'Shake' Shakir, and a weekly show on Radio Oxigenio that regularly joins the dots between early UK hardcore and the latest in future garage and twisted disco, the future looks even brighter for these two talented Portugueezers.