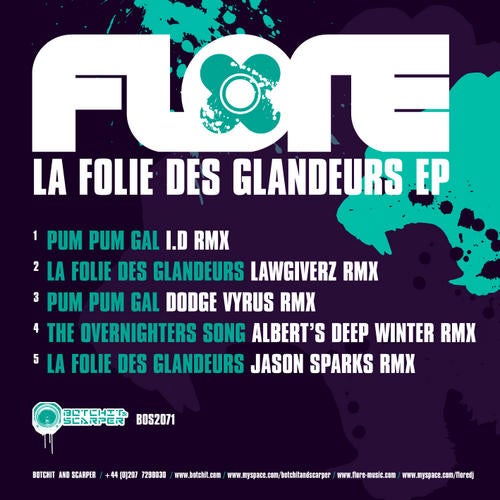 For Botchit & Scarpers 71st single weve invited some of our favourite artists to remix a few of our best-loved tracks from Flores acclaimed 2010 debut album Raw. The result is an E.P including five dazzling new remixes from the Lawgiverz, I.D, Albert, Dodge Vyrus and Jason Sparks each of which reveals yet again the brilliance of the French artists distinctive panache.Each remix takes one of RAWs tracks in a completely fresh direction with styles including dubstep, 2-step, electro, breakbeat and glitch and the results are quite extraordinary with all 5 artists creating truly memorable mixes. La Folie des Glandeurs (Lawgiverz remix)Part comic book and part ritual magic - Lawgiverz is the combined talents of R-Kidz & Knoize. From the early days of studio lock-ins with Mechanoise and Botchit, they went on to become resident DJs at Trigger and toured the world, discovering that west coast USA was the home they had been searching for. In fact, R-Kidz liked it so much he decided to stay. Lawgiverz have made lots of records, many of them tweaked-out adventures in bass that have polarized opinion since day one, but having cut their teeth on huge soundsystems and free parties, why compromise? In a strange career that has seen them remixing for SOTEG, Antennae and Future Funk Squad, Lawgiverz have also designed equipment for Funktion One and written music with Jeff Beck and Dave Stewart. The universe is a strange place.On this remix, a heavy, syncopated bassline coupled with dissected, distorted vocals are interspersed with poignantly memorable high pitched synth leads in a remix that could not get more out of the original. Lawgiverz once again presents a strong remix that takes Flores auditory dynamism to a whole new level, instilling it with a glitched out depth in a dancefloor track that will blow you away. The Overnighters Song (Alberts Winter Depression remix)Hailing from Denmark, Albert started making Hip-Hop beats while he was still living with the old folks back in 1995 before being turned on to 4/4 in 2001 when he began making full tracks. In 2006, he was booked for his first gig at Nadsat in Copenhagen, since then he's DJed all over town, including a residency at Dunkel. Albert has released a couple of Techno / House tracks, notably on Nightology Records, under his real name Magnus Wanscher. A few years ago, Dubstep and 2-step caught his attention and the rest is hopefuly yet to come. Consistently pumping beats are set against Vale Poher and Scaldes mesmorising vocals in a titillating tune that builds to introduce a highly infectious bassline. This unforgettable track cannot but lift those winter blues and have you dancing all night as Alberts individual energy is cleverly infused with the originals intoxicating atmosphere, lending it a subtler, ingenious mood that send the listener to a state of aural ecstasy. Pum Pum Gal (Dodge Vyrus remix) Dodge Vyrus, aka Andy Havok is one half of Element X and began his career in 2009 having gained experience doing guest shows on the FM dial for the likes such as De-ja Vu, Station FM and Heat FM. He subsequently received a regular slot on Touch FM and has played various large London venues. His recent releases include the heavy Wha Gwaan on the StudioRockers Re-Wired EP. A darkly vibrant bass perfectly compelements Thaistylees heavy vocal, and are cleverly teamed with fragments of the strangely sensual voice of Joyce Muniz; dubby, dancefloor impact is irrefutably evoked. The stylistic synthesis exhibited by Dodge Vyrus remix makes for a track that brings Flores originals palpitating effervescence to an unimaginably compelling auditory realm. Pum Pum Gal (ID remix)IDs career took off in 2004, when The Feeling, a collaborative project with Baobinga was released on Hardcore beats, landing him several compliations as well as being picked up by EA Games for FIFA Street 2. His individual sound is between the zones of dubstep, garage and breaks, and his releases include remixes of the Stanton Warriors track Blazin. He DJs around the globe, from China to Australia, Romania, Denmark and Portugal, and also runs the website www.bassmusicblog.com. IDs distinctive flair for tuneful synth chords and complex rhythmic vibration brings a tapestry of texture to the original, permeating the vocals with harmonizing consistency that demands attention. At no point during the track is any of the thrashing intensity dropped for even a split second, in a breathless remix of fervent beats and stylishly expeditious bass. La Folie des Glandeurs (Sparks remix)A long-established producer in both the fields of downtempo and breakbeat, Jason Sparks, released his debut album with Botchit & Scarper in 1999. Heroes and Villains was highly acclaimed, and the single Secret Place reached number 1 on the Captial Radio Club Charts as well as being A-listed on BBC Radio 1 Xtra for 2 months. His diverse influences (including Miles Davies, Portishead and Sebastian Tellier) coupled with his reliance on inspiration rather than techy equipment make for an artist whose sound could not be more irreplaceably matchless. A positively Sparksian vibe reworks Flores massive track into a ride of pure sonic hedonism: dubby ambience masterfully teamed with the retained energy and vigour of the Les Gourmets original vocals make for an audio experience quite unlike any other. This is a tune that strikingly demonstrates the potency of collaborative fusion between two extremely different, but equally compelling, artistic sounds.Beginning her career with classical piano and guitar, she regularly began to appear on the dance scene in 1998, soon grabbing the attention of huge DJs such as Freestylers, Krust and Amon Tobin. Progressing quickly in 2002 into nu-breaks, she introduced the style to France secured her 2003 accolade from Printemps de Bourges as one of the most up-and-coming electro DJs. As well as having lead at most of the major French festivals, Flore has played worldwide, in venues such as Londons Fabric, Berlins Icon, Genevas LUsine and Beijings Cargo.