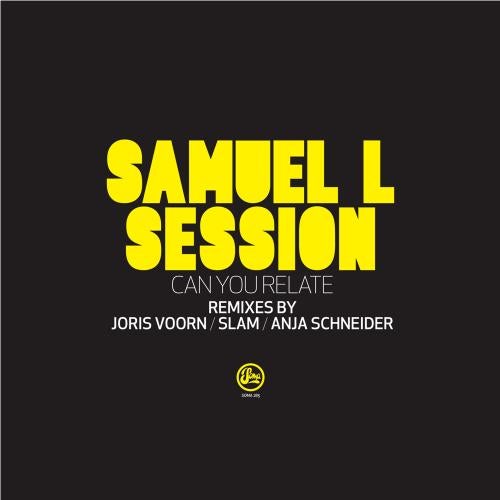 The long-awaited second instalment of Samuel L Sessions Can You Relate Remixes is finally ready to hit the floors. A full year after part one of the remix packages was released, Joris Voorn, Slam & Anja Schneider bring a plethora of Techno to the table in part 2.

Joris Voorn delivers an outstanding remix in his own archetypical styling. Combining luscious groove with jacking percussion, Joris heads straight to the floor. Slices of the vocal are used rhythmically throughout the track as the off-beat bass drives deep. The now infamous vocal appears at the break, laden with dizzying pan effects, filtered hi-hats and Samuels pitch-oscillated synth. Joris is at the top of his game on this release.

Slams vocal mix of the Can You Relate track was released first time around and caused raucous reactions on dance-floors the world over. Here, Stuart and Ordes Dub will no doubt have the same affect!

Anja Schneider turns in 2 dazzling remixes of Samuels original, Can You Relate. The first keeps the tempo up, but takes the lights down - a dark and brooding track creeps out from the Mobilee boss shadow. Her second remix, Out Of Berlin (digital only), gets all tripped-out, with a very raw feeling emanating from the track. This version is even more sinister with its freaky looping vocal cuts and hovering synth, along with some beautifully crafted effects and fills.

Can You Relate (Remixes Part 2)