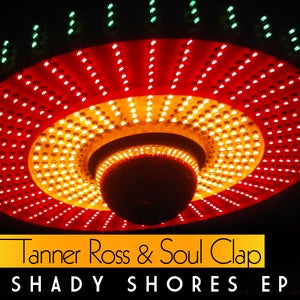 Intergalactic funk brothers in arms Tanner Ross & Soul Clap join forces on the mothership Wolf + Lamb to deliver the mind-altering mini-opus that is the Shady Shores EP, also featuring a stunning remix from Deniz Kurtel & Gadi Mizrahi. Making his storming debut on a label he was born to represent, bona-fide beat hustler Tanner Ross flares further into the public consciousness in a golden collaboration with two of the galaxys most unique and forward thinking music makers Soul Clap. The Shady Shores EP is cinematic journey through deep cosmic jams, warm mid-tempo house to all out space funk sleaze. It will make you feel like youre marooned on Mars. Kicking off the Shady Shores space odyssey, Intro Track, is a trippy mix of woozy synths, strange and spaced-out FX, constantly in motion through an ever-evolving, soundcape. Miami Shores instantly transports you to the laidback space motel with its warm synths and floating female vox riding on the funkified groove and Deniz Kurtel & Gadi Mizrahi turn in a Freestyle Mix of M.E.S thats a shimmering drive down deep post-dubstep terrain infused with rhythmic distortions of male vox. The Shady Shades is a moody anarchic space stomp that makes you feel like there might be some intergalactic unrest afoot but its back to the Spaceship Slo-mo Disco with M.E.S for more low-slung beats broken up with a scattering of stardust. Rounding off the trip, 60 Thompsons tonal rise and fall and sultry funk is utterly mesmerizing. The one constant throughout the life of Tanner Ross is music, from his New Jersey upbringing heavily influenced by music old and new, to his current status as a passionate DJ and producer. Having put out earlier work on labels such as Dirty Bird, Freerange, Airdrop and Culprit, 2011 looks set to be the making of Tanner Ross. With appearances on the Wolf + Lamb vs Soul Clap DJkicks mix on !K7 (In The Park and Goodbye, Summer) already under his belt and outstanding material forthcoming on No.19 and Double Standard as well as plans for an album on Wolf + Lamb next year, Tanner has well and truly landed. Bostons finest, Soul Clap, are currently riding the mega wave of success an upshot of sharing an impeccable grasp of what makes a party go off. Their unique strain of electronic funk has been captivating audiences worldwide and along with the rest of the Wolf + Lamb collective, they continue to shake up the surface of house music with their infectious trademark music philosophy.