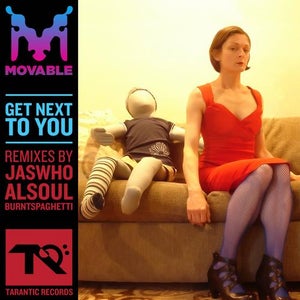 Get Next To You

Tarantic Records is back with a whopping five-track release from Movable (Marianne Potje a.k.a. Marianimal and Brad Eller a.k.a. BradElectro). Originally from Chicago and St. Louis, Marianne and Brad draw upon the black urban sounds of their hometowns, while mixing in the pop sensibilities that come naturally to them. The ex-lovers-turned-friends first worked together as Duo Electro, an all-hardware live PA that helped rock the San Franscisco underground dance scene in the early-00s. Get Next To You is a flirtatious cut about the kind of person you're drawn to over and over, every time you see them or talk to them, even when they're with someone else. We understand, some obsessions are hard to give up. Thankfully, our love affair with Movable has only just begun.

The first remix is by Temple SF resident jAswhO?, who delivers a trademark energetic bassline, addictive synth riffs and a screaming lead masterfully played alongside the vocals of the original. Alsoul lends his native Chicago sensibility to the mix with seductive pads, funky sequences and snappy percussion. BradElectros dub is quite faithful to the original- only stripping the vocal and adding reverb because as he states: a dub is a dub, it aint a remix. Finally, Los Angeles-based musician burntSpaghetti brings us home with a pleasantly unexpected dark, cinematic downtempo mix that features his masterful Spanish guitar work.