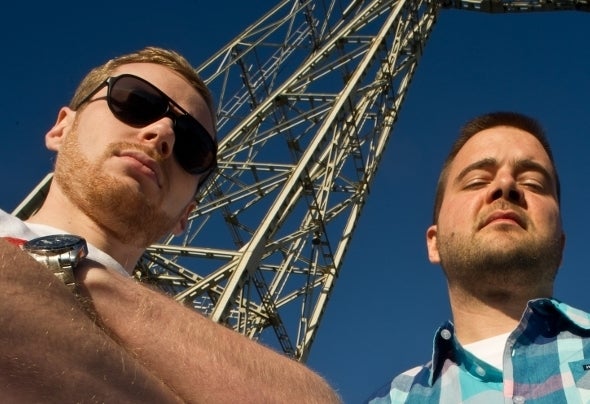 Seemingly appearing out of nowhere (but actually hailing from Hamburg, Germany), the production and DJ duo known as So Shifty has made a ridiculously strong impression in the past years.Quoted as "the best new thing in 2009" on the infamous club music blog, Discobelle, So Shifty established themselves this summer with a remix of The Very Best's "Warm Heart Of Africa" that the band selected as "the very best" of about 35 different remixes of the track.The huge success of this remix led to a feature on official EA Sports FIFA World Cup 2010 Playstation Game and blasted through livingrooms and clubs all over the world.After the success of this genre-bending remix, So Shifty were instantly commissioned to do remix work for a couple of Island/Universal artists while continuing to pump out critically-acclaimed unofficial remix work as well.Through their long-time connections with the Jamaican Dancehall scene, they reached out to Dancehall's three hottest female artists--Natalie Storm, Timberlee and Tifa (aka TNT)--along with their old friends from Ward 21 on board to round out the three original songs on their fantastic debut EP, „Wine Touch Clap“ on Crossfaded Bacon. Remix duties were handled by label boss Emynd, tropical hotshot Douster, finnish club kings Top Billin and Them Jeans of Dim Mak fame.With bigwigs like Sinden of Kiss FM as well as Diplo and Annie Mac of BBC Radio 1 (hosts of the UK's most renowned club music radio shows) showing support from day one, So Shifty's debut EP was released in january 2010. In addition, So Shifty tracks gained airplay on Mark Ronson's show on East Village Radio, New York via Thee Mike B, as well as the West Coast's biggest urban radio station, Power 106, where they were featured by Them Jeans.More recently, they were commissioned to remix Beware & Motorpitch's „El Toro “ (Man Recordings for a german marketing campaign courtesy of Hennessy Black. Also, So Shifty's remix of „Keep It Goin' Louder“ by Major Lazer feat. Nina Sky and Ricky Blaze was officially licensed for Mad Decent's very first label compilation.In 2012, the duo continues to make waves with the release of their highly acclaimed „Rumba“ EP on Man Recordings, featuring the cuban Reggaeton sensation Madera Limpia and remixes from Brazil's Edu K, the texan Peligrosa collective, Chong-X from Peru, and fellow german producers Bass Ill Euro as well as label head Daniel Haaksman. So Shifty's Junior Blender teamed up with Major Lazer's Diplo to create an astonishing remix of Hot Chip's „Look At Where We Are“, and they also joined forces with Walshy Fire (also of Major Lazer fame) to remix Mr. Vegas' worldwide Dancehall smash hit „Bruk It Down“. They Additionally, they were commissioned to remix major artists such as Rizzle Kicks, Encore and No Doubt.