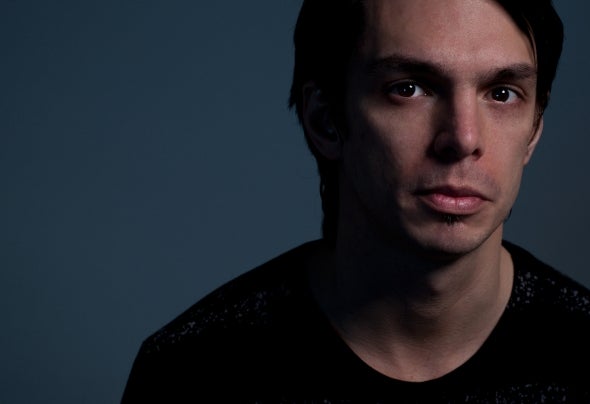 FOUNDAT IONSFrom a very young age Santa Cruz was in constant contact with the Music. He developed a strong passion for it, most particularly influenced by his father: a pianist in the Armed Forces’s Orchestra, and his mother who collected vinyl discs. Those two inflowings gave him both the love for enjoying music and the discipline to investigate, create and perform.Impressed by great world-wide artists such as Technotronic, New Order and Yazoo, Santa Cruz discovered electronic music and managed to obtain his first vinyl plates SL 1100. They had only a rotatory pair of pitch (33 & 45) and were the perfect tool for him to start playing music.BEGINNINGSSanta Cruz career as a DJ began at the age of 16, when he performed in many underground electronic parties in Uruguay. He did great but it wasn’t enough. He was eager for more and the reaserch and growth continued in the pursuit of introducing himself in the world of electronic music. He bought his first SL 1200 trays and immediately took his first official steps as a professional DJ.Santa Cruz achieved to perform in that time main Montevideo’s Clubs like Milenio and W Lounge. Although very sound-focused, he always had and understanding of music as a whole, hence he took an active part as producer and planner of legendary events such as Electrosummer, ElectroAutumn (Milenio), Vincent Bar, Hypnotica, Halloween in White Club, Frecuencies01, Deep Zounds and Intelligent Sounds. He got in touch with national and foreign DJs and got national recognition for joining the best DJ’s list.ROUND TRIPIn 2001 Santa Cruz decide to go to Miami to enhance his experience and maturity as an artist. There he had the opportunity to perform at some of the most important Clubs of this city: Liquid, Opium Garden, Breez (Pre-Billboard Live) and in several times his music was played in the well known Miami’s radio The Womb.After a 3 years stay in Miami, Santa Cruz returned to Uruguay where he was merrily received and invited to participate in important festivals as “Fiesta de la X”, which gathered more than 50.000 people. As a producer and remixer, we can find Santa Cruz in Chicago label Nightshade Music, where artists like Ben Brown, Kris B, Nosmo, Yura Popov are part of, Progrezo Records, Pild Records.PUSHNowadays Santa Cruz has a defined his musical style in the world Techno sounds with powerful influences of House. His music is always very personal and distinctive and shows a polished technique that allows him to give variations that spice his solid coherent sets.When asked about his reputed fine musical selections, he will always explain you that is all about caring and connecting: with himself and with his audience. Music is the vehicle to build a bridge between his deepest self and people and thus cannot be done without creating an ambience based on the complete understanding of what people want when listening or attending to a party. In the 2012 Santa Cruz créate 0dB Recordings, a label for get together the best sounds in the world with excellent artists like: Ronan Portela, Aldo Cadiz, Marcelo Demarco among others and his productions today called the atention of mainly artists like Richie Hawtin, Dubfire, Barem.. As promoter Santa Cruz was making for the last 3 year one of the best NYE Main Events playing music with artists such as Valentino Kanzyani, Nima Gorji and Masomenos...He played in Buenos Aires, Argentina, in La City and is great performance as guest DJ at Mariah Mariah Club in 2005, earned him the offer to be resident.