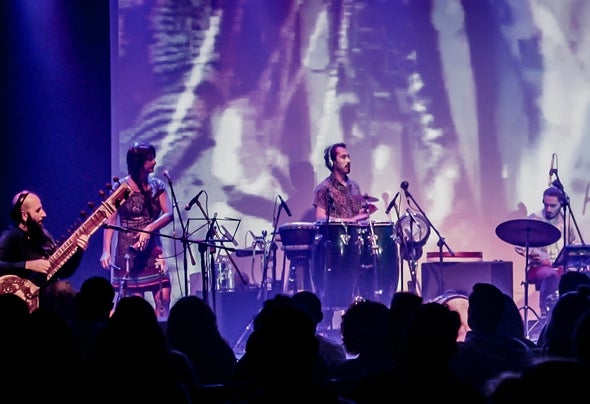 Brazil's culture is a rich mosaic of many cultures of the world. No wonder Pedra Branca band, from São Paulo, Brazil, plays ethnical instruments and electronic timbres to create Brazilian experimental music. The live band founded in 2001, with Luciano Sallun direction and production musical bringing in a unique way a proper way of making music in the world in a contemporary and universal. With fifteen years of existence today could be seen as one of the biggest names of Brazilian "world music" and without doubt the largest group of "chillout / lounge" Brazilian. Successfully in Brazil managed to be a reference for numerous projects and national and international DJs, as well as a reference for the Brazilian audience, contributing to the gradual opening of these sections in Brazil. Conducted a tour in August 2008 in some festivals in Portugal as "Bons Sons Festival" and "Boom Festival". Besides the music the group often works with dance performances and interacting directly with the concepts and artistic expression, and Vj's artistic languages and varied, and can thus say that a complete presentation of the group already becomes not only a musical but a multimedia shows. Are launching in 2009 the third album titled "Organismo Eletrônico", and also the DVD in partnership with the Company. Dances of Diadema in the show "belief, who said?" by Ana Bottosso and musical direction by Luciano Sallun. In 2010 they are touring with the album " Organismo Eletrônico " and playing to show "Crendices", and play in Theatre Municipal of the Mexico City. Later this year was created the soundtrack for the show Ragas group of Ares aerobatics by Monica Alla and musical direction by Luciano Sallun. In 2011 release album "Radio Global". And 2014 the band play in Le Berges Festival in Paris, France and release by Merkaba Records the album "DNA" and now in touring live.