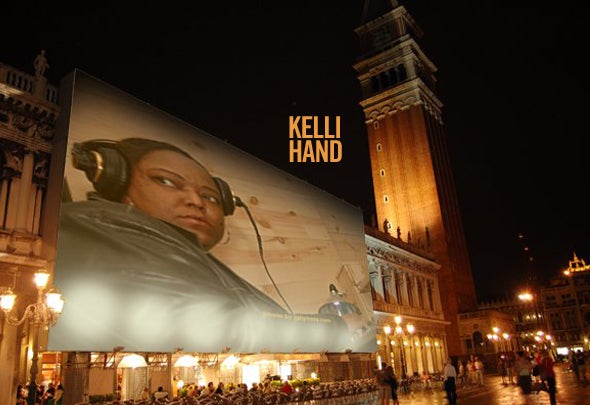 K-Hand’s musical development began at a very early age in Detroit. At just six years old Kelli was already embracing the study of voice, piano, and bongos and went on to play the drums and a variety of percussion instruments throughout High School. In college she studied Music Theory and frequented legendary clubs such as “The Paradise Garage” as well as started her own inspirational Classic House vinyl record collection that her mentors Larry Levan and Timmy Regisford were playing in the early to mid 80’s. In 1990, with Kelli’s enthusiasm and knowledge for this musical sound, she was quickly recruited by the late Ken Collier to DJ for “Zippers” club in Detroit as well as started collaborating with the Collier brothers, Greg and Ken. Within the same year, she released her 10th twelve inch release,”Everybody”, and “Freak them Hoes”, while launching what is now known as one of the most remarkable record labels in electronic music history; Kelli Hand’s own “Acacia Records”. Hand decided to release her 1st music license “Mystery” under the pseudonym “K-HAND” to avoid gender stereotyping in 1991, which is known today as her darker Techno side (with “Kelli Hand” being her soulful House side, as well as her now well known Live Public Appearance surname). With fervent passion and drive, Hand had started forging her highly regarded and respected path, and was professionally and publicly acknowledged as the very first woman to ever release electronic music in the world. Additional 12? hits like “Candlelights,” “Flash Back” and “Think About It” cemented her career and by 1994 her name took off in earnest with equally strong Techno and House releases throughout the early and mid-90’s breaking her name overseas, appearing on Warp (UK), Distance (France), Reload (UK), Studio !K7 (Germany), Ausfahrt (Germany), Tresor (Germany) alongside various high-profile compilation appearances and a downpour of music licensing worldwide. This was, of course, in addition to maintaining her own stellar Acacia Records recordings. Kelli Hand’s first full-length album was released in 1995 on the highly-regarded Studio !K7 imprint in Germany, which in turn was also the very first album to ever be released on this label. In addition, Hand launched the careers of many now prestigious and internationally well-known artists, which first appeared on the Acacia label. These artist’s include Claude Young (1990 to 1993), and Wamdue Kids now aka Wamdue Project/Chris Brann (1995-96) just to name a few.