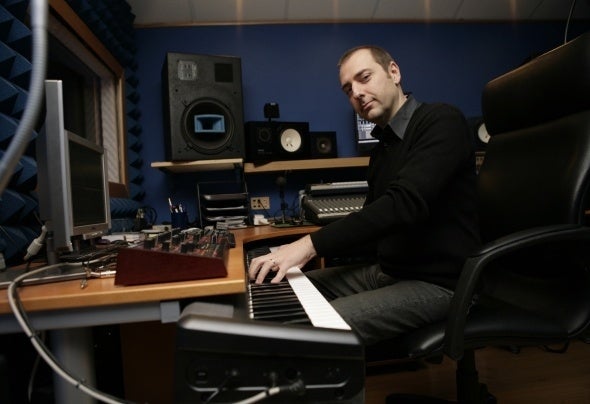 Giacomo Bondi was born in Genova (Italy) in 1966. Since 1989 he moved to Rome where he still lives and works. Owner and director of GBMUSIC, Giacomo Bondi is a self-taught musician of various instruments, who grew up listening to Kraftwerk, Tangerine Dream, J.M. Jarre, as well as the Beatles and Italian artists like Pino Daniele. As early as 1985, he worked in many recording studios, working on music technologies/computers as audio engineer, midi expert and arranger. Giacomo always had a great passion for computers and music technologies, experimenting and continuing to study the relationship between sound and its effects in order to compose songs dense of noises and rarefied sonorities trying to recreate the typical visual atmospheres of cinematic and television music.Bondi has been the editor of the magazine MUSICFILE and he currently is the editor of STRUMENTI MUSICALI (SM), the most important Italian magazine about electronic musical instruments and music technologies.In 1992 he created his own recording studio in which he started producing many Italian pop artists continuing to play, at the same time, with some of the most important soul and blues groups of that period in the Roman scene.It was in 1996 that he chose to leave the stage and become his own producer preparing hundreds of refined musical compositions ranging from lounge, chill-out to electro jazz. Giacomo Bondi has produced important PRODUCTION MUSIC LIBRARIES for companies like RAITRADE, MACCHIAVELLI ONETRACKADAY, MEDIASET R.T.I. His compositions have been used on RAI and MEDIASET commercials, documentaries, and news segments. In Bondi's productions there are also 200 minutes of music for many DVD series published with the famous Italian sport magazine “Gazzetta dello sport": equalling over 1,000,000 copies! In 2002, he won second place in the Italian music composition contest for TV soaps and Television, “SOUNDTRACK LAB”.Until now, Giacomo Bondi has written some of the most refined electro-bossa, soul, lounge and chill out projects printed and licensed around the world. His first album, entirely produced and composed by him with the band named “LO LIGHT”, was printed in 2003 by the music label “DO IT YOURSELF”. Other important projects by Bondi are the two bossa/lounge albums “LATIN VIBE 1 & 2” that were produced by the Italian label Antibemusic: the great success brought by these two CDs, gave Bondi the opportunity to be part of many compilations in Italy and abroad.As arranger, Giacomo Bondi has collaborated with some important Italian artists like Gatto Panceri, Enrico Boccadoro, and JIM PORTO.With the pseudonyms VibraPhile, Mazachigno, Luna Lounge, Soft Sofa and 2 Dancing Dogs, Bondi has appeared as producer and remixer in over 150 important, national and foreign, compilations, the most important ones were CAFÉ ROMA series, BREAKFAST CLUB series (USA), SUNSET AND SUNRISE series (GREECE), CARGO series (ITALY), ASTORIA LOUNGE series (ITALY), PORTOFINO SUNSET (BRAZIL) and many others. Among his latest collaborations, Giacomo Bondi is proud to have worked with the famous Brazilian pianist and jazz singer Jim Porto, with whom he made two versions of the song "Voce è demais" (written with Saturnino) and "Diga" played, among the others, by RADIO DEEJAY, RADIO GLOBO, RADIO SUBASIO, RADIO UNO RAI, gaining 3rd place on the MIAMI 105 playlist.Bondi unceasingly continues working as producer on Lounge, Nu:jazz and Bossa projects, thanks also to his precious collaboration with artists of national fame as well as French, American and Brazilian vocalists. Together with his friend and co-producer BRASS, from 2005 to 2007 he produced the artists STCLAIR, EVANDRO REIS, LISA MARONI, JAZZISTIC and GABRIELLE CHIARARO which was released also in Korea, Japan and Thailand.