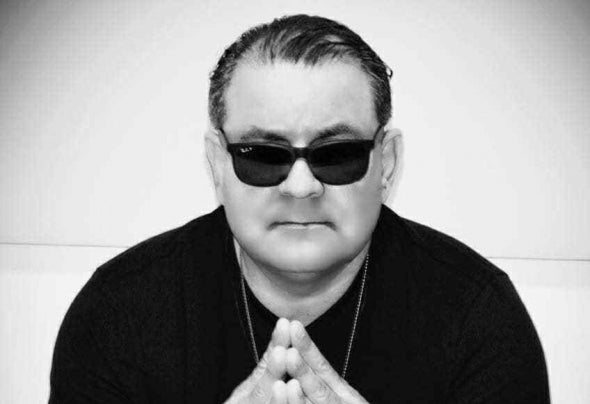 George Alvarado who goes by other Aliases like THE EVOLUTION OF DISCO, THE LATENIGHT LABORATORY, THE PROFESSOR AND TECH MAN 1 Started his Journey in South Florida in 1979. The Combine inuence of DJing, Record label owner, Music store owner, Producer and Remixer has placed him as a big part of the Electronic Dance Movement in South Florida. George is adept at shifting between genres of Electronic Music like NU Disco, Disco House, House, Tech House, Tribal House, Techno, Progressive and Trance and other formats like Classic Rock, 80's, New Wave, Alternative and 90's Old school. He is also driven by a relentless passion for music, striving to stay on top of the Electronic scene he's helped to grow in South Florida. He continues to work towards building a global brand as a DJ, Producer and Remixer. LABEL OWNER: In 1989 He launched Nitebeat Records the rst underground record label in South Florida. The label released all sorts of electronic music like Techno, House, Trip hop, Break beats and dapped into hip hop beats as well. Nitebeat Released projects with some legendary Global producers, such as, Robbie Rivera, Oscar G, Ralph Falcon, George Acosta, Peter Presta & Charles Webster (UK). . Nitebeat also released various CD compilations all over the world in countries like Brazil, United Kingdom, Japan and Germany with labels like PARADOX, AVEX, SONY, LOGIC, and EXTREME. PRODUCER/REMIXER: In 1989 He produced his rst underground 12" record called "House Your Body". In 1992 George produced his rst album under the pseudonym, Techman 1. Their rst CD Release was thru PANDISC music in the US. As the artist known as TechMan1. So far he has produced and remixed close 80 Productions that can be heard on his Soundcloud page. www.Soundcloud.com/GeorgeAlvarado He Just wrapped up a Remixed of The Classic Anthem Fired Up by The Funky Green Dogs which was redone Jade Starling which went to number 3 on the Billboard Charts.