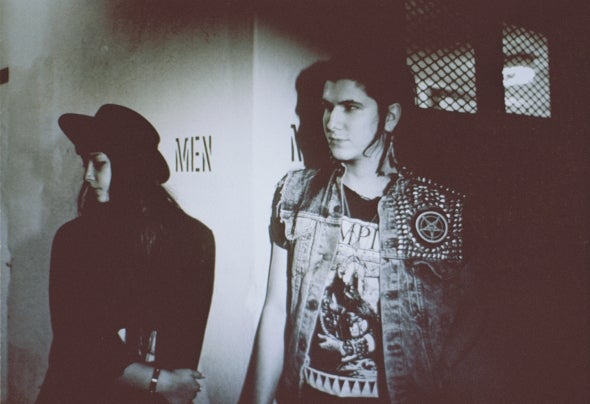 Named “Artist To Watch 2011” by Beatportal, Deathface (AKA Johnny Love and vocalist Effy) comes at you hard with a sound inspired by Midwest hardcore of the 90’s, Magic the Gathering, woodland bonfire parties, white trash drug debauchery, Atari Teenage Riot, and Aleister Crowley. It’s the soundtrack to The Omen’s Damien Thorn and The Exorcist’s Regan MacNeil dropping 2C-B at Anton LaVey’s first rave.Scary, right? Now for some history...Johnny Love is one of the most provocative figures in dance music. A native of Southside Chicago, Johnny rose to infamy in his hometown in the early 2000’s via a series of events he threw at The Jerkstore which shunned predictable-dance-rock for eclectic and loose cuts from minimal techno and French touch house. The parties got so wild that Love was imprisoned by the Chicago police on more than one occasion and was constantly featured in both local and national magazines like Timeout Chicago, URB, and XLR8R.With things too hot in Chicago, Johnny moved to Los Angeles and formed Guns N’ Bombs. The hard-hitting electro-house duo were quickly offered a contract by Kitsuné founder Gildas Loaec in 2006, making Love the first American to be recognized by the French Electro elite. He soon became a seminal player in the formation of the current American EDM scene, remixing acts like Chromeo, The KLaxons, The Gossip, Junior Senior, The Cult, The Teenagers, and Ghostface Killa.After a vast amount of critical acclaim and the making of many friends, enemies and frenemies, Guns N’ Bombs disbanded in 2009 and Johnny decamped to a hideaway in Brooklyn to craft Deathface’s swift and deadly takeover.Recent collaborations include an amazing t-shirt through Mishka (designed by Seattle’s death-rock- obsessed streetwear giants Actual Pain), three releases on taste making label Trouble & Bass, a video with @LILINTERNET (http://www.youtube.com/watch?v=HwKGBsl4et4&feature=youtu.be) remixes for Marilyn Manson, Creep, Buraka Som Sistema, Huoratron, Blessure Grave, Drop the Lime, Mexican Institute of Sound, autoKratz, Kid606, and tracks featured on the new Max Payne 3 game.