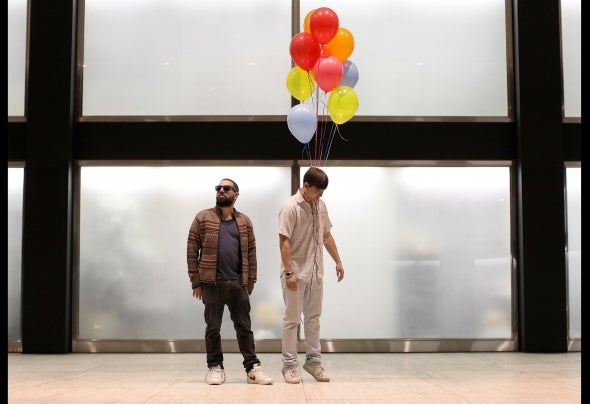 DARK PARTY is the electronic dance project of ELIOT LIPP and Chicago- based producer LEO 123. Each with their own respective critically hailed releases, they make and DJ electronic music influenced by House, Disco, and 80′s Hip-Hop rooted in New York and Chicago, the cities where they currently reside.Having originally met at The San Francisco Art Institute several years ago, the DARK PARTY project actually didn’t come together until 2005 – formed as an outlet to pay tribute to the duo’s favorite classic productions, while forging their own path towards the perfect modern beat.Together they create upbeat, electro-funk masterpieces – a bit more suited for the dance floor than their own respective solo ventures. Their sound could sometimes be compared to modern acts like Metro Area/Morgan Geist, Daft Punk, Dam-Funk, Jimmy Edgar, while giving nods to classic dance beats from the 80’s & 90’s.Over the last couple years, Dark Party have toured the country, sharing the stage with acts like Gaslamp Killer, Skream, Prefuse 73, Mike Slott, Pretty Lights, Bassnectar & many others. Their previous releases have been limited to remix work for the likes Daedelus, HEALTH, STS9 and Jogger as well as releasing an exclusive song on the hugely popular ‘Ghostly Swim’ compilation (a Ghostly Recs & Adult Swim collab).This summer brings the highly anticipated release of Dark Party’s original material. Starting off with a pair of releases from their full length “Light Years”on Old Tacoma Records. The first Single “Patrol Patrol/Status” featuring remixes from Ghostly International’s Mux Mool and Michna. The second single “Flats/Feets” featuring remixes by John Roberts (Dial) and Mexico City’s Duopandamix (Static Discos). All this leading to the release of their debut album “Light Years”. Years in the making but worth the wait this is the music everyone’s been waiting for.