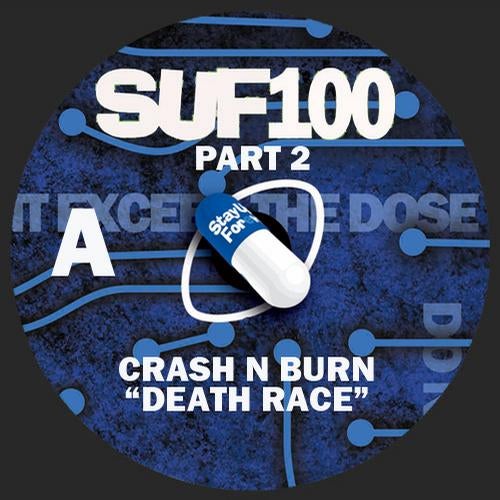 The second of what is to be a four part Stay Up Forever 100th release. After the massive "Croydon Girl" by Chris Liberator, Sterling Moss and Rackitt on SUF 100 part 1, it's now the turn of four of the most notorious 303 raiders ever to grace the control tower of acid techno. On the A-side SUF co-head honcho Aaron Liberator teams up with legendary Smitten, Routemaster and RAW Recordings artist The Geezer for a jollied up bit of acid naughtiness. A straight up homage to David Carradine and anyone that likes to drive recklessly about killing anyone that gets in their way. Yes this is the return of Crash N Burn on SUF, a superb follow up to their big hit "Santa Pod". On the flip, DDR the true godfather of acid techno and the man behind Hazchem and C.O.S.H.H. records joins forces with another legend, Powertools Records owner Ant, for their first release as Cogs, Beans And The Machines and they certainly pulled out all the stops for this bad boy of a tune - dark, heavy on the bass and a hilarious vocal make this a readymade cult tune.