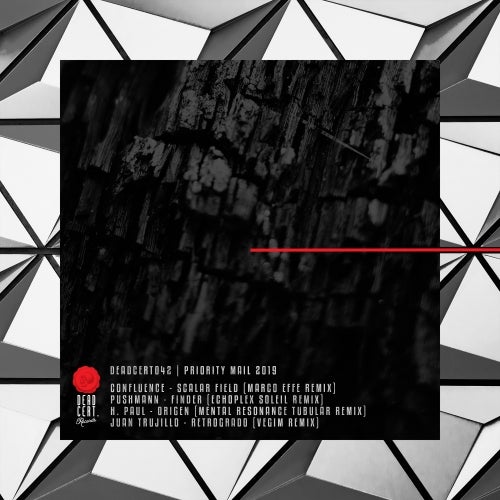 A hand picked selection of remixes from the DEAD CERT. back catalogue to start off the new year. 01. Confluence - Scalar Field (Marco Effe Remix) Berlin based Marco Paoletti has a vast history, diversity and pedigree of productions on the likes of Sven Väth's Cocoon, Dubfire's SCI+TEC, Luca Agnelli's Etruria Beat and many more. His sound has now become underground and fully Techno focused making him ripe for inclusion to this release. 02. Pushmann - Finder (Echoplex Soleil Remix) Echoplex is a long serving and respected artist from Poland, who comes with a high pedigree. Running his own Soleil imprint he has also released on labels like Soma, Index Marcel Fengler, Synewave and ARTS. His rework becomes more aggressive and subtle, with a wealth of added melodies, layers and grit he creates a powerful and driving interpretation. 03. H. Paul - Origen (Mental Resonance Tubular Remix) Guido Camino aka Mental Resonance is respected for his quality sound the world over. Hailing from Buenos Aires, he already has a revered selection of labels to his name such as Oscar Mulero's PoleGroup, Pfirter's MindTrip and Arnaud Le Texier's Children of Tomorrow for example. 04. Juan Trujillo - Retrogrado (Vegim Remix) Vegim Hashimi makes a return to DEAD CERT. after his EP featuring Joachim Spieth last year, this time he supplies the second remix. The TMM Records owner based in Kosovo is known for his creative production styles with music on the likes of Rebekah's label Decoy Records, Reaktivate, The-Zone and A.Paul's Naked Lunch amongst others.