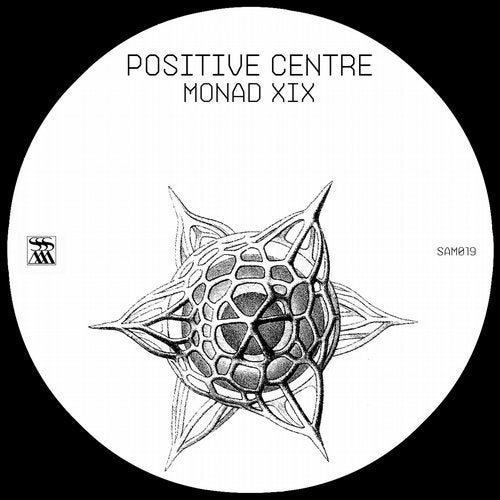 The Monad releases by Stroboscopic Artefacts are one of the most successful serial adventures in modern techno, utilizing an ethic of mysterious unfoldings to elicit new expressions from both veteran and relatively new producers. The latest installment in this growing archive issues from the mind of Mike Jefford's Positive Centre. His is a project whose name is steeped in the same type of intriguing ambiguity as the Monad series: a 'positive centre' could refer to the dense nucleus of an atom or to some hermetic and purposeful organization, though all interpretations point to some thing or phenomena defined by intensity and essentialism. The same can easily be said about the musical contents of this new EP release. On "Great Excavator," Positive Centre lays out its intentions quickly and unequivocally, with a continually layering and hypnotically captivating arabesque of percussive sounds and accents. With only traces of a melody line or bassline, the opener engages the listener with its tactile aggressiveness, and encourages involuntary muscular twitches as if the stimuli were delivered through carefully placed electrodes. Unlike such an experimental procedure, though, this track's stealthy variance in syncopation offers a unique narrative quality rarely achieved by other tracks of its kind. This is just an initiation for an exploration that allows the listener to sink into deeper, more inaccessible levels of consciousness. The follow-up "Disappearing Trick" lowers the temperature and corresponding tension, but not so much as to totally nullify the kinetic energy and aforementioned feeling of direct stimulus unleashed by its predecessor. It motors rhythmically through a thick nocturnal fog, infused with an attitude of strict discipline and calmness, and eventually terminates in a gorgeous cascade of bass notes leaving endless trails of 'space cathedral' reverberation behind them. The third stage of the journey, "Figure is the Form", strips away more layers sonic complexity while drawing the listener in towards a mystery that becomes more elusive even as it seems to offer more hints as to its true nature. Combining a languid dub tempo with a ritualistic sensibililty, our host takes us further away from the dancefloor and into Stygian waters, but always with a sense of curiosity rather than one of impending doom. The end of the journey is marked by "Signal Structure," a captivating wash of synths that offers a slowly unspooling sense of melancholy along with its preternatual glow. All told, Monad XIX is a release rich with 'emergences' from an artist who is himself emerging onto the electronic music scene, and who holds out the promise of revelatory journeys into the depths (both sonic and psychic) for all those who want to come along. FEEDBACK James Ruskin Great 12, thank you! Clouds Huge one! Tommy Four Seven Quality! Svreca Really happy to hear a new Monad release. Full support. Shapednoise 'Figure is the Form sounds really interesting. Inigo Kennedy Very very nice indeed! Digging Great Excavator a lot (ba doom) and Signal Structure is a really nice soundscape too. Ancient Methods Good release. Ill test Figure is the Form. AnD lovely stuff from positive centre, we always like his approach and sound design Paula Temple Really enjoying all tracks. Will hammer 'Figure is the Form' in my sets. Ed Davenport Great work - proper electronics! thanks