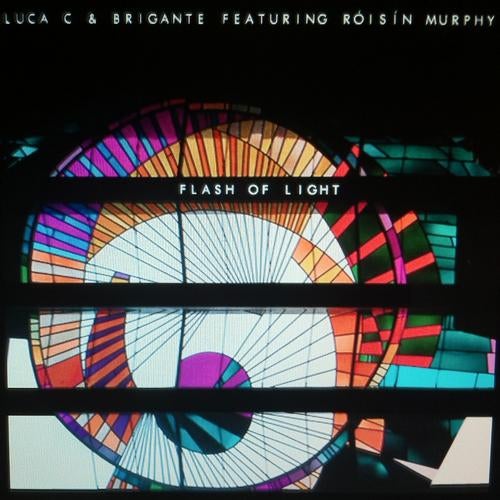 Filtering through apocalyptic sunbeams, the iconic voice of Roisin Murphy shimmers above Luca C & Brigante's spacey vibrations in 'Flash of Light' - the next spark of brilliance from the ever more ubiquitous duo. In the shining brace of remixes, Solomun takes it straight to the neon club, while Blond:ish bring a dose of dreamy tech...

"When a friend of mine introduced me to the music of Luca C & Brigante I was stuck with an apocalyptic feeling, as if I were listening to the sound of a party at the end of the world. And with such strong imagery coming to mind I was only too happy to write with them when they asked. 'Flash of Light' is about that last night on earth, a forewarning of the end of an era and a last chance to Love" - Roisin Murphy

Luca C & Brigante are beginning to need no introduction as their heady Balearic mix of sounds continue to resonate from the beach to the club. Together, they have dropped bombs such as 'Different Morals' feat. Ali Love and the Robert Owens fronted 'Tomorrow Can Wait'. Luca C is also one half of Infinity Ink, whose 'Infinity' has been one of the summer's biggest records, and a new addition to Hot Natured alongside Jamie Jones, Ali Love and Lee Foss. Sebi aka Brigante has remixed the new single from Ali Love, about to drop on No.19.

Aligning with the ancient Mayan prophecy that the end of the world is due December 21st 2012, Luca C & Brigante's new single 'Flash Of Light' featuring dance music icon Roisin Murphy is a call to love like there's no tomorrow. Embedded in heavy reverb and stripped back to slow steady drums, the mood rises as Roisin's crystalline vocals fall into rhythm and weightlessness builds with the bassline hook, pearly high-pitched strings and a burst of harmonic percussion.