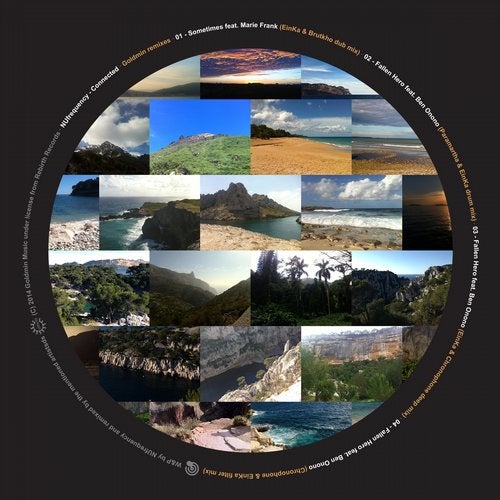 We are very happy to announce our first official collaboration with the great italian label Rebirth records. This results in 4 new remixes of fantastic Nufrequency - Fallen hero and Sometimes tracks by EinKa, Paramartha, Chronophone, Brutkho. Established by Daniele Contrini alias Shield in 2006, Rebirth Records has surely grown up over the years into one of the most respected Italian independent label. We've been inspired a lot by the constant quality of their releases, their stunning artworks and most of all the wide variety of artists they work with. Nufrequency is the group of the label founder Shield himself and his studio partner Cristiano Massera. In 2012 They released their first album "Connected", a conceptual and very diversified piece of music where the two italian musicians collaborate with several singers from all over the world like Massive Attack collaborator Shara Nelson or the great reggae vocalist Hawkman and ride between Leftfield, downtempo and deep house on the 1st Cd and where some of the best tunes get remixed by well known househeads like Motor City Drum Ensemble, Wolf+Lamb, Tony Lionni, Jef K & Gwen Maze on the 2nd Cd. Most of these remixes were played a lot and Fallen hero (Mcde remix) becomes a real classic on the seminal website Resident Advisor as the the most charted tracks of all time. Two years later Goldmin Music founder Romain Lanteaume alias EinKa and three artists of the label make their own version of their two favourite tracks of this album: "Fallen hero feat. Ben Onono" and "Sometimes feat. Marie Frank". Unfortunately, Cristiano Massera half of Nufrequency has passed away on June 14th of this year at the age of 48. We heard that terrible new when we were working on the remixes.. We didn't know the guy personally but felt really sad about that and of course we would really like to dedicate it to this very talented artist whose music will never die and keep "connecting" people all over the world. This is exactly the goal of this album, get to connect a wide spectrum of artists and styles, get to connect the acoustic with the electronic and people from all over the world. This is definitely a goal and a state of mind we share with the Rebirth team. That's why EinKa decided to collaborate with Darren Harris alias Paramartha and Stphane Joulin alias Chronophone (who just joined the label) to remix "Fallen hero" and with Horvath Tamas alias Brutkho (author of our last vinyl) to remix "Sometimes". The result is again a very diversified collection of remixes where Paramartha & EinKa bring "Fallen hero" to an hybrid chilled drum'n'bass epic remix. With Chronophone, EinKa tried to give the lyrics of this track their full meaning through a very deep mix and a paradoxical melancholic and funky version of this. "Sometimes" on the other hand is reduced to it's essential leaning towars an organic and minimalistic mix by EinKa & Brutkho. Thanks to all at Rebirth Recordings for allowing us to work on these tracks and well this is our first "connection" but not the last! 'Sometimes' feat. Marie Frank Written by Cristiano Massera, Daniele Contrini and E. Marie Frank. Lyrics and vocals by Marie Frank. Published by Rebirth Oyez! Uk and copyright Control. Instruments, synths, piano and guitars by Cristiano Massera. Remix and additional production by Romain Lanteaume and Horvath Tamas. 'Fallen hero' feat. Ben Onono Written by Cristiano Massera, Daniele Contrini and Ben Onono Lyrics & vocals by Ben Onono. Vocals recorded at Saffron Hill Studios. Published by Rebirth Oyez! Uk and Jos Publishing Ltd. Instruments, synths, piano and guitars by Cristiano Massera. Remixes and additional production by Romain Lanteaume, Darren Harris and Stphane Joulin Artwork design by Sebastian Dittmann. (P) 2012 Rebirth Records (C) 2014 Goldmin Music under exclusive license from Rebirth Records.