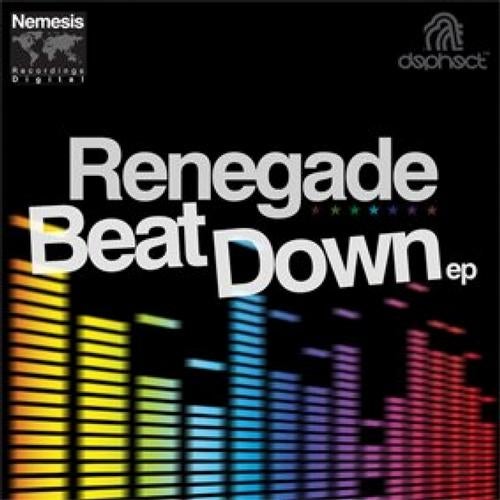 Scotland's newest producer RENEGADE finally gets his first release on the mighty NEMESIS RECORDINGS DIGITAL label. Home of such artists like SKREAM, SILVER, SONIC, DJ CABBIE, DJ ORIGIN, Here we see the Edinburgh bad boy hit us hard with a brand new 4 track E.P entitled BEAT DOWN. First off we have the mighty sounds of BEAT DOWN which has been featured on BBC RADIO1's FABIO & GROOVERIDER's show and also on CRISSY CRIS mix show on BBC1XTRA. Heavy beats and rugged basslines hits you right where it hurts as this one takes no prisoners! This one was tune of the day at this years GLOBAL GATHERING 2011 as it took the crowd by storm, not to be messed with trust me and will get your head rocking time and time again. Next up on this mini long player we have the intense sounds of SHOW DOWN which features other budding artist AESTHETICS to the fray as the conjure up something nasty for your listening pleasure. Hard kick and snare work this track well while the tear out long bass notes get you bubbling to the maximum.Another track that will cause devastation on the dance floor for months to come believe me! Onwards now and we come to SINISTER which sees RENEGADE go down the long dark tunnel to create another moody yet SINISTER track that will get you in the zone. Old school breaks are mixed up and blended with todays heavy artillery kick and snare which gives this track the drive and punch it needs to turn any club night into a frenzy. This one has been going down a treat on the dance floor for some time now and finally gets to see the light of day at last. Last but not least we come to GOTA DO which features another good friend and studio partner in crime TREMA as both lads come with another dancehall smash. Squelching bass covers some dirty drums while the bassline just takes you to a new dimension. This one has also been in the box of many DJ's such as ANDY C, CRISSY CRIS, SILVER, RANDALL, ROWNEY & PROPZ, DJ ORIGIN, PLEASURE and this goes on and on! The BEAT DOWN E.P is set to cause damage this autumn as we prepare ourselves for dark and rainy nights to come. So make sure when your out and about or sat at home in the rain or dark, put this on your player and see the light shine through.