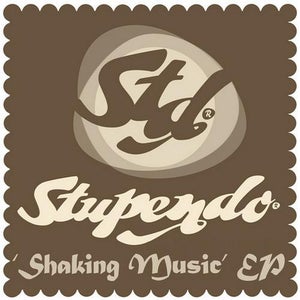 STUPENDO RECORDS are back in business after a short break, and hit the ground running with their first release of 2013. DUDU & 13-14 FORMATION are at the controls with their '''SHAKING MUSIC''' EP, and these two young producers from Leon in northern Spain are brimming with enthusiasm, and hungry to bring something new to the difficult world of dance music. On this evidence, they have more than succeeded.

The duo already have a strong track record with releases on labels like the AUDIO JUNKIES''' ASYMMETRIC imprint and DO2NIGHT, and DJ support includes DANILO VIGORITO, RAINER WEICHHOLD, NEUROXYDE and many others. Towards the end of 2012, DUDU & 13-14 FORMATION got in touch with STUPENDO, and we decided to release an EP showcasing the sound of a new generation of Tech-House beats _Made In Spain_. Around the same time, the guys won a remix competition for WALLY LOPEZ'''S FACTOMANIA label. Their reworking of '''MAGNETICO''' by BIAS & EDGAR VM was selected as the best from over 200 demos submitted to the competition. This only confirms we made the right decision to release this project.

The '''SHAKING MUSIC''' EP features three original tracks from the guys, all with their own character, but with the same foundation of solid groove-based, percussive House Music. '''TARUMBA''' starts things off and has a stripped-back jackin''' groove at its heart. As the energy builds and the bassline kicks in, extra layers of percussion including a hypnotic chimes melody are added to the mix creating a sweet and sultry track. You can feel the heat of the dancefloor coming through.

Next up is '''DEMASIATTO''' where they step things up a gear. The simple vocal hook and rolling beats are soon joined by spectral vocals creating an intensely atmospheric effect. This is definitely one for later in the night. '''OKAWANKO''' completes the EP, and this funk-fuelled uptempo number is a proper body-shaker. '''SHAKING MUSIC''' is the sound of two young producers really finding their feet, and they are definitely ones to watch in 2013.
---
http://soundcloud.com/stupendorecords
www.youtube.com/stupendorecords