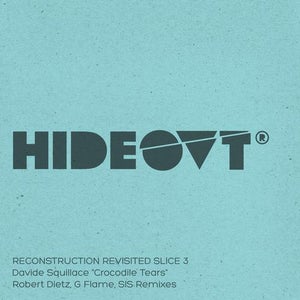 After the huge succes of its tenth release ( Davide Squillace & Guti ) , Hideout is back with with the Third slice of the Deconstruction Revisited Series .This time , Crocodile Tears , which appeared on Davide Squillace´s Tutti Frutti ep ( HO003 ) got offered three amazing relectures .It all starts with Mr Robert Dietz ( cadenza , cecille ...) who delivers a super modern and energetic relecture where intelligent synthetic percussions mess around with weird noises and processed effects . After two minutes a monophonic synths starts its battle with vocals from Squillace ´s original to end up on a more minimal groove .GFlame aka Portugese techno start Cisco Ferreira ( The Advent ) ´s relecture directly sets the tone : a nasty bassline with a crazy synth stab flies over a soft but very heavy techno beat , to evolve to an elegant tech house track ( no bongos involved ) Finally , Sis , the man behind Cocolino imprint ´s reinterpretation starts with a long intro with the kick dropping after more than 3 minutes . The melancholic feeling of the track builds into a very subtile beat with reverbered elements all over . The percussion layers and delicate melodic synths add some organic flavour to the music so the 14 minutes remix is never boring and takes you to a nice journey thru sounds . You can tell somebody was in love when making such a beautiful song .Another must have from Hideout !!!