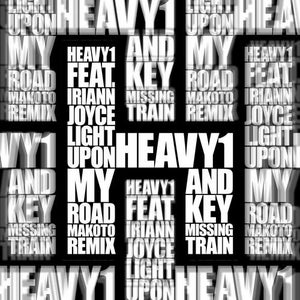 Light Upon My Road (Makoto Remix)

HE:Digital's 11th release, "Light Upon My Load(Makoto Remix)" and "Missing Train" from Heavy1 who is Japanese leader of new school.
Heavy1 has been getting a lot of support from DJs around the world and showcased his production through "Millers"(Samurai Music) played by DJ MARKY on Fabric55 which made tons of DJ hammering his tunes.

01. Heavy1 feat. Iriann Joyce - Light Upon My Load (Makoto Remix)
"Light Upon My Load" from Heavy1's new debut album, remix done by Makoto(HE:Digital). Featuring full of her vocal Iriann Joyce, a vocalist from Venezuela. Here it is, a difference of Makoto, showcases his new way of Drum'n'Bass.

02. Heavy1 & Key - Missing Train
"Missing Train" is a techno track, capturing the image of Drum'nBass. Kicking off with beats from Heavy1, combining bewitching vocal from Key. The two has been co-starring through an album "Minimalized". This track will propose a new scene.