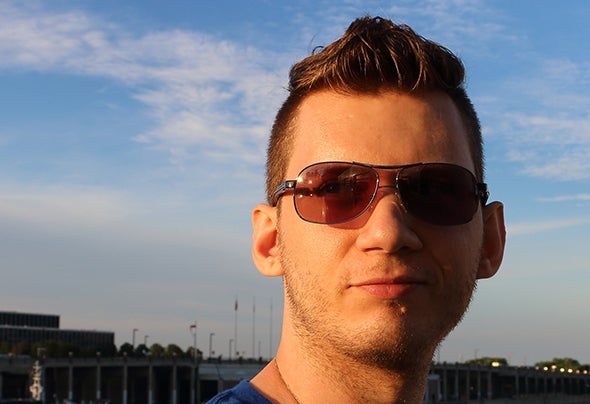 "You Wish”, by the real name Gabriel Mican, is a Chicago based artist & producer. He classifies his style as Progressive House with some Electro – all built around a love for a strong melody. His music has a feel-good vibethat is captured in his track “Celebrate” co-produced by house music pioneer Vince Lawrence, which debuted as his first single on iTunes in August, 2013. A music video was also shot for “Celebrate” in collaboration with veteran motion graphics artist Scott Gordon of California. ‘Wish cites early 1990s Euro-dance as a big influence back when he lived in Europe. Groups like The Prodigy and Faithless served as inspiration to become a music artist and producer himself. It was around that time that he got his hands on a Casio keyboard, a gift from his father! He became instantly in love with synthesizers! Having lived in different parts of Europe and now in the U.S.A. “You Wish” knows first-hand the impact that electronic dance music has on people. Its message is that of love, unity and respect. It’s the sound of hypnotic synthesizers and hard kicking drums that brings fans together who share a common love for dance music. Having signed a record deal with Chicago’s indie imprint “Barstol Music” in April of this year, You Wish is ready for the next phase of his career.Addicted is the first release under the new label, with many more to come in the next year. Of the track You Wish says: “Addicted is about the passionate cravings of a lover. When you are so madly in lust with someone that you can actually feel the sensations coursing through our body. It’s a unique feeling. T his is how I feel about music. The lover I am addicted to in the song, is actually music personified. I wanted the track to sound both soulful and melodic, but also hard hitting. The first part is about the musical foreplay, and when the drop hits I wanted people to feel the intensity of the song. In a way, it’s a lot like love.”