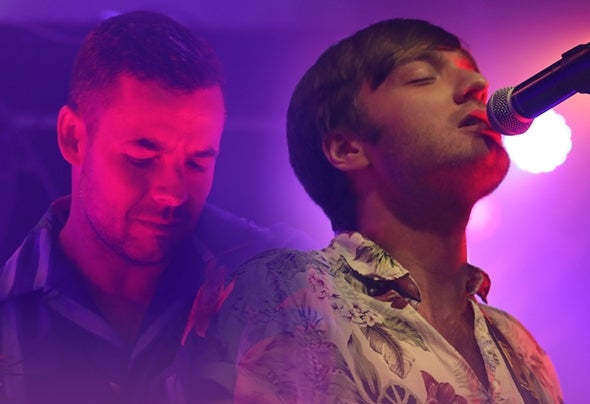 The Midnight is a Synthwave duo, formed in Los Angeles in 2012. Comprised of Danish producer, songwriter and singer, Tim McEwan & American singer- songwriter, Tyler Lyle.Raised in a family of entertainment business contributors, Tim McEwan (Sep 16, 1979) hails from Copenhagen. Exposed to music an theatre from a young age, McEwan attended Los Angeles Recording School in his late teenage years, 98- 99. Tim McEwan has served as a producer and songwriter for several national and international acts, mainly within British pop, R&B and Electro.Tyler Lyle (Dec 1, 1985) originates from Carrollton, Georgia. He has been working professionally as a singer-songwriter since age twenty-one, primarily within the style of Indie-folk. For more than ten years he has been releasing music under his own name, as well as his 2016 founded project - The Secret Lair.Tim & Tyler met at a random co-writing session in Los Angeles. Combining Tim’s 80s aesthetics with Tyler’s singer-songwriting skills, they soon found a joint studio chemistry. 'WeMoveForward' and the chorus for 'Gloria' were written that day. Subsequently the two musicians founded The Midnight, releasing their debut EP 'Days of Thunder' in 2014.Electing to forge their own path in the ever-evolving landscape of modern music, the bicoastal duo have self-released the majority of their catalogue, up until now. Their music pays homage to the dreamy and uplifting, yet subversively melancholic 80s film and television scores of their youth.