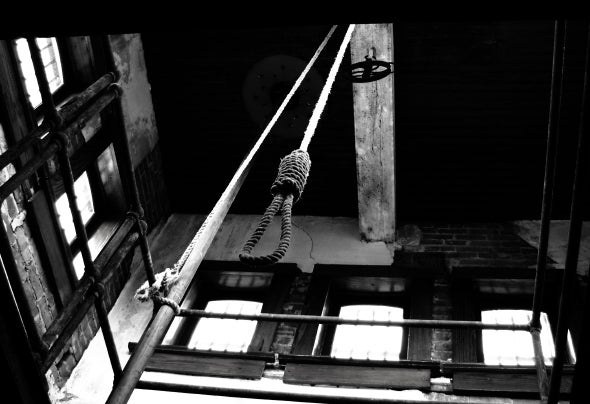 In the 16th century, King Charles V reigned over the people of Ghent with harsh rules and high war based taxes.The laborers revolted against the current regime, claiming their place and raising their voice as citizens.King Charles humiliated his rebels by parading them with hangman nooses around their necks and sentencing them to the gallows.Their free worn spirits still wander the streets of Ghent today. Our very own Noose Brigade embodies their message to release us from the tyranny of conscious thinking.When words fall, their pitch‐black dungeon techno speaks. Crawl into the notes and curl back as the bass lines launch you into the unknown.With their first vinyl only release coming soon on their home label Thrill Recordings, our producing team has made their love of raw techno music a dominant ingredient in their productions.The combination of technical skills, musical background and grinding analogue machines, make their studio time worthwhile. These melted minds, warped perceptions and unorthodox sounds result into a steady stream of dark, heavy bounced tracks equipped with both depth and magnitude.They have demonstrated a strong and inventive production style. Their tracks embody a 360-degree view of techno, balancing twisted, subtle pitch manipulations with a touch of no‐nonsense. The dark 4/4 stomps are dueling with the throbbing bass lines. Epic builds and eary melodies transforming into hypnotic and deep loaded grooves. Their musicis free of crippling nostalgia and rather wins you over with consistency, tension and dynamics. One thing is crystal clear: they hit all the right spots, becoming an integral part of the T hrill Recordings family. T hey continue to move the label and its growing collective in dynamic directions.