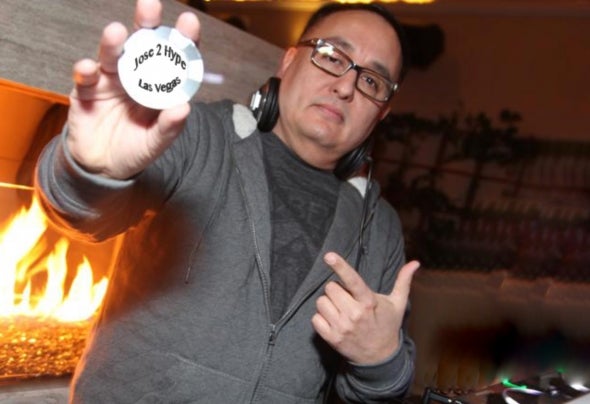 In 1991, Jose 2 Hype started his DJ career and became one of the pioneers to break the Rave culture in the City of Sin (Las Vegas), spinning at literally hundreds of events locally and across the country. Shortly after, Jose began producing tracks starting with the "Jose 2 Hype E.P." which appeared under his own independent label "2 HYPE RECORDS".The success of tracks like "Move Dat Culito," "Jax Back" and "Clap Your Hands" this paved the way for getting signed with and representing one of the most influential "Hard House" record labels known at that time: "UNDERGROUND CONSTRUCTION."(Chicago) Via this medium, Jose presented to the dance community cuts like "Jack Attack" and "Dance Your Ass Off".Jose 2 Hype's producing and remixing skills then led him to produce for other labels as well, "RENEGADE RECORDS" (Chicago) "PEERLESS" (Mexico) “CONTRASEÑA” (Spain) and "SHOCK RECORDS" (UK) among others.Jose released a music video for his original production "YES" which has been shown in over 55 countries and made top 3 music video of the month on BPMtv (Canada). Most of his titles have been featured on internationally known DJ mix compilations and all of his records have been sold throughout the world.Jose 2 Hype entertained as a long-time resident DJ at Studio 54 (MGM Grand) and performed both as a Resident DJ and Music Director at Tabu Ultra Lounge (MGM Grand). Other residencies included Cherry Nightclub (Red Rock Station Casino), Eve Nightclub (Aria Hotel Casino) & Chateau Nightclub (Paris Hotel and Casino). He is also in demand at events worldwide, making regular guest DJ appearances.Currently, Jose produces and remixes tracks for domestic, as well as international record labels. He is presently releasing original music, along with other artists on his industry-respected label, “2 Hype Records”.