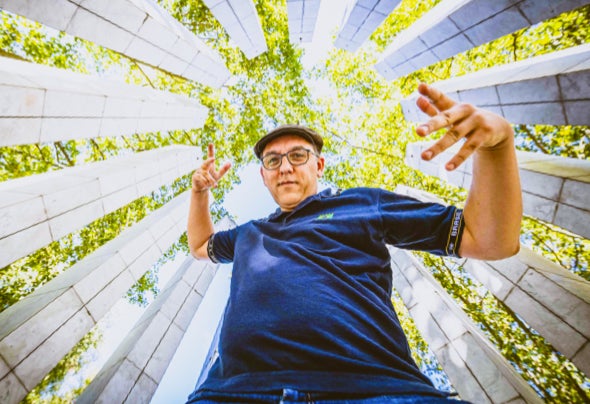 Born in Paris, France, Sébastien was obsessed with Funk & Soul music from an early age, especially classic 70s vocal numbers. From there, he moved into original Hip-Hop and Reggae, but Funk and R&B were dominant where he grew up and played everywhere. In the late 80s, Sébastien was a member of a Parisian Sound collective called ‘Jungle Sound System’ playing Jamaican vinyl releases ahead of the curve. Travel then opened up Sébastien’s musical tastes even further as he discovered high-energy, joyful scenes including Afro-Cuban, Samba, and Zouk. Fast forward a few years, and that musical history has turned into a production career. Since 2018, he’s released a stream of edits and reworks that take classic songs & enhance them with equal parts passion & modern production techniques. And, as his DJ and production name suggests, FunkeeSounds focuses on Funk, Soul, Disco & Nu-Disco. And he has one ambition – to translate the feel-good factor from his music to his listeners via the dancefloor. In 2020, Sébastien signed PuzzleProjectsMusic record label, his debut release ‘In the Mood’ hitting the Juno Download N°1 spot & N°9 in the Traxsource in the Soul/Funk/Disco charts. This followed with the feel-good disco tune ‘Waves of the Time.’ Summery and full of sunshine beats - the perfect blend between disco’s roots and the nu-disco sound of producers like Miguel Campbell. April 2021 saw Seb follow the theme of his feel-good funky music with his brilliant debut EP 'City Lights’ which like all of his releases has seen huge support from leading DJs globally. The rest of 2021 & 2022 sees Sébastien work on fully original music for vinyl and digital release on PuzzleProjectsMusic.