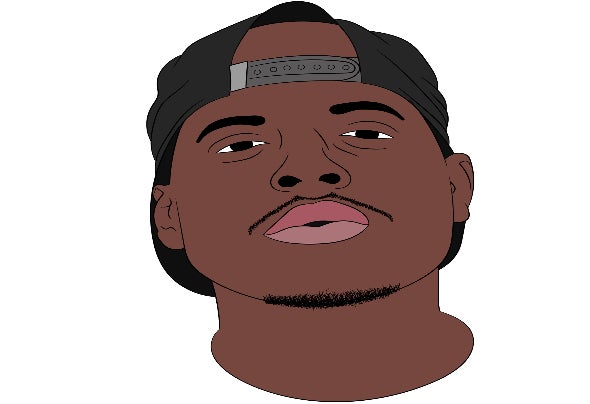 EQ Why bridges the Chicago footwork scene and the experimental music underground with his raw, abstract tracks. While his tracks retain the fast, choppy tempos and aggressive, sometimes sexually explicit vocal samples typical of juke and footwork, he often incorporates jungle-influenced breakbeats and more offbeat samples. His work stylistically draws a line between footwork's Chicago home base and its stranger Japanese variation, as reflected by EQ Why's Chitokyo Mixtape from 2013. Originally going by the name DJ T-Why, Tyrone Smith was affiliated with Bosses of the Circle, a footwork collective (founded by DJ Roc in 2005) that later included artists such as Young Smoke and Jlin. All of these artists were featured on Planet Mu's Bangs & Works, Vol. 2 compilation in 2011, which included three selections by T-Why. He released a few mixtapes under this name before changing his moniker to EQ Why in 2012. Starting with that year's Equalized EP, he began releasing a staggering amount of music online. The 12" EP Enter the Why, Vol. 1: You Got It was released by Duck N' Cover Records in July of 2013. This was shortly followed by The Dynamic Time, a CD issued by the Japanese label Booty Tune, and Chitokyo Mixtape, an intense 60-tracks-in-60-minutes cassette released by the experimental label Orange Milk. EMC2, a split EP by EQ Why and DJ Elmoe, appeared digitally in late 2014. The full-length World Relief, featuring collaborations with DJ Roc, followed in 2015. Several digital albums, including Cold World and BattleGroundz, were released in 2017. EQ Why had another prolific year in 2018, as Orange Milk released WhyTrax (a collaboration with Traxman) and the experimental EP Spring Steeze (with Diamond Soul) was released by Bedlam Tapes, in addition to solo releases such as Back to the Block and Make the Feet Go Around. Featured Publications: DJ Mag, Chanel, Apple Music, Adidas, Fact-Mag, Mixcloud, The Wire, Beatport, The Quietus, Zap Mag, BBC Radio, Dublab, Vice, XLR8TR