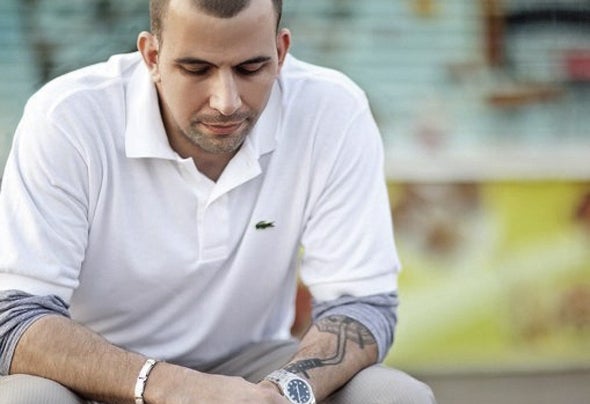 Formerly known as dj r.e.a.l.i.t.y. Demian classifies himself as a TECHNO PRISONER since 94'. Simply put, he was born in 1978 in Brooklyn, NY, USA. His love for music was discovered at an early age being his mom was a hippie so she always played early blues, folk rock and Rock-n-roll from the Grateful Dead to Led Zepplin to The Allman Brothers. It didn't end just there being raised in his grandmothers house where Andrea Bocelli and Luciano Pavarotti were commonly heard. Fast-forward to his teen years and it was then he learned that there were rumors of these underground dance parties going on and so by age 16 he had ventured out to his first party. It was Novemeber 1994 he attended my first "rave" in NY and it was from then that his life would change forever. Before this happened he and his friends were messing around with djing early hip-hop and house (before he knew what it really was). The art form of true turntablism and mixing records really resonated in his mind from that point on. So from about 1995 he began playing Acid Trance until 1997 and at that time he figured out that that wasn't the genre he was really into and that Techno was really was calling. Anytime he puts sets together or digs for that perfect track to share with the masses he pulls inspiration from some of the DJ/Producers that really left a mark on his soul like Richie Hawtin, Juan Atkins, Derrick May, Frankie Bones, Adam Beyer, Marco Carola, Josh Wink, The Advent etc etc. DJing has always been his passion and always strives to perfect the craft. So it wasn't until 2000 that he toyed with some early production gear and made some noise with it but now here we are many years later he is ready to share his hard work with you. One of his favorite terms "Let's Get Techno"; this statement truly envelopes the goal and hopes of what this music will do to you. "Demian's versatility as a performer and passion for music is inspiring." -Agent Orange NYC "Demian's been playing proper techno before you f***ers thought is was cool. Driving mental beats for the warehouse or sexy funk for the club. A true NYC veteran." - Justin Schumacher NYC