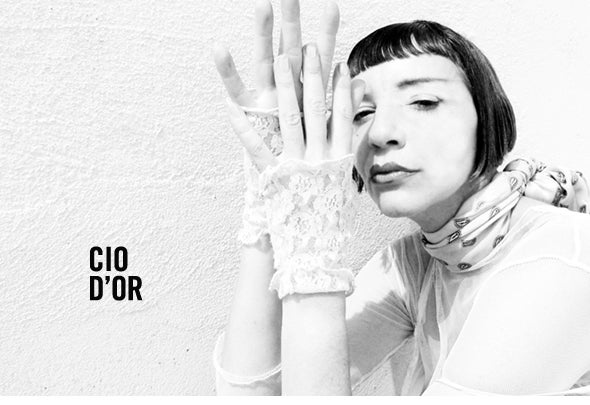 Cio as a DJ Cio D´Or moves. Filtering to track down deep and authentic musical developments amongst the mass of records without forgetting the gems of the past. Her dj sets arise from an idea, which she develops and threads through her set. Emotional, extravagant and charismatic. Cio´s style is more techno than house, ranges from maximal to minimal. It has depth and is filled with bass, is often surprising and propelling, though still clear. Music, in the form of dance and rhythmic instruments, moved Cio D´Or right from the start. Her first steps onto the stage were at 17, playing congas in a 7-person jazz band. Her staged dance choreographies were inspired by the likes of Brian Eno and David Byrne. Her life began to revolve around the exploration of music. The first 1210 record players spun permanently. Her love for sound intensified and since then no day has passed without music. Tobi Neumann heard Cio D´Or in a bar in Munich and booked her straight away for "Flokati". Gigs at diverse parties and clubs followed. As support dj for Richard Bartz and his "Kurbel" tour, Cio D´Or joined the professional league, after which her residency in the legendary Munich club "Ultraschall" began. She started to run her own night "Nachtwind" in "Woandersclub" and "Harry Klein". From this time, Cio established herself consistently on national and international floors with her emotive, almost magical sets. She doesn´t play music, she lives it. Cio as a producer Cio dedicated herself to her autodidactic studies of sound technology. Her quest for sound began, she sampled everything and everywhere. Kitted out with minidisk and MPC 2000 she travelled several times to the Sinai. She produced website loops, expanded her studio and produced her first tracks. Her passionate search for extraordinary sounds progressed. Her debut record "Hokus Pokus" dashed rapidly into the Groove Charts. In her tracks Cio values individual sound elements, which she emotionally packages into topic-related dramaturgy. She selects her co-productions according to musical proximity and her friendship e.g. Donato Dozzy, Paul Brtschitsch and Gabriel Ananda. In October 2009 she will release her Album "Die Faser" on Prologue inclusive Remixes by Donato Dozzy, Sleeparchive, Function, Milton Bradley, Pendle Coven, Samuli Kemppi and Claudio PRC. The album track "Goldbrokat" will be visualized by VJ Heiligenblut.