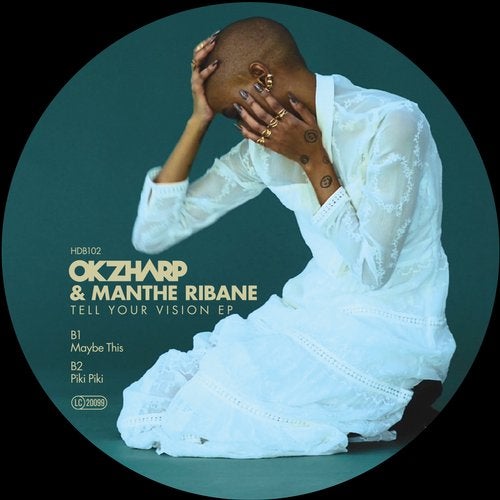 Okzharp and Manthe Ribane return with their second EP 'Tell Your Vision', a call and response between Manthe's vocals and Okzharp's production. Both bring their unique energies to the mix, manifesting in a raw confidence of new moods and temperatures that were brought out from their first taste of touring and living on autopilot.

The EP's title is a reference to its opener, 'Teleported', which was created in Okzharp's car on an exploratory drive through London and inspired by the art and energy they came across. The track opens with a ferocious bass line, with Manthe's rumbling vocals rolling rhythmically over the top. She takes us with her as she lets the music possess her as if dancing; quickly spitting the vocals back out, urging the listener to "Tell your vision!".

A much more gentle and reflective turn comes on second track 'B U'. Okzharp's slow and soft lullaby melody and Manthe's warm and inspiring lyrics tug at the heartstrings.

In the upbeat and playful 'Maybe This', Manthe's vocals flit between a hum that softly swells over the top of Okzharp's spacey melody, into an energised and bouncing rap.

The EP rounds off with the warm anthem 'Piki Piki', with the chorus sung in the South African Sepedi dialect. Okzharp's long synth lines draw us in with Manthe's vocals melting and blending into the track. 'Piki Piki' has an unmistakably positive vibe, which becomes emphasised when Manthe switches to English, with lyrics that advocate self-affirmation and self-love.